What better way to celebrate the 50th anniversary of The Beatles ‘Sgt. Pepper’s Lonely Hearts Club Band’ album, than watching the Mersey Beatles perform. They are the closest you’ll get to actually watching the Beatles these days, and that is an opinion shared by not just fans, but family members of the Beatles themselves as well.

The first half of the show was unsurprisingly dedicated entirely to the ‘Sgt. Pepper’s’ album. The band, who were in full Sgt. Pepper’s costume, performed the album in order, from start to finish. They also included ‘Strawberry Fields’ and ‘Penny Lane’ in this set, as they were originally supposed to be included in the album, but were released as singles instead. This was an interesting insight to those who didn’t know, and something that continued further in the projection at the back of the stage. Throughout the show, different images and facts were given to us and this helped take us back to the era we were all so eager to visit.

The band, made up of Mark Bloor as John, Steven Howard as Paul, David Howard as George and Brian Ambrose as Ringo were all naturally at home in their roles. Knowing that they’ve been performing together since 1999, and having seen them perform before, this was to be expected, but still a delight to witness. The characteristics and personality of the band members really shone through, and you felt that sense of unity between them all. 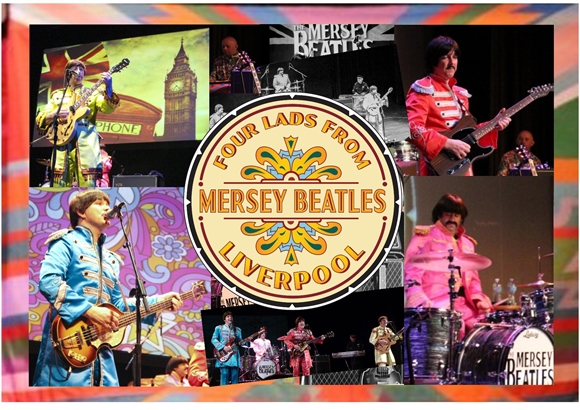 The Mersey Beatles has a fifth member, and he comes in the form of a keyboard player called Tony Cook. The unassuming Cook is integral to the formation of the band, and without him a lot of the music would have been missed, from the ‘Harp’ sound in ‘She’s leaving home’ to the circus sounds of ‘Being for the benefit of Mr. Kite’

The second half of the show took us back to the rock and roll days of the Beatles, and most definitely uplifted the audience after a long interval. Opening with ‘I want to hold your hand’ and finishing with an encore of ‘Get back’ with plenty of other classics inbetween, the whole audience seemed on such a high.

Unfortunately, there was a low point to the evening which was due to technical problems. At times the sound of the instruments were louder than the sound of the vocals, and sometimes I felt myself straining to hear the voices. It wasn’t a major issue, but something which could have been easily fixed. I would have liked to have been able to hear the performers talking between songs a bit better as well, but it was hard to tell if that was due to them talking too closely into the microphone, or sound technicalities.

Near the end of the show we were told that it was Steven Howard’s final performance with the Mersey Beatles, which felt like a real disappointment. He makes such a perfect George Harrison in his playing, singing and performing and will clearly be very missed. His personal rendition of ‘Within you without you’ was compelling and certainly showed us what he was capable of.

Overall, the Mersey Beatles made for yet another highly enjoyable evening. It was a joy to be a part of a mutual love for four lads from Liverpool, who went on to thrill the world.