Gary Murphy and his multi-talented band kicked off the evening with Chuck Berry’s classic ‘Johnny B. Goode’. We were told that this was in tribute to the Rock and Roll legend who passed away earlier this year. They created a vibe that would carry on throughout the evening, displaying to us the skills that come so naturally to them all.

We were taken through a history of rock and roll by the band playing iconic numbers, with a commentary in-between by Billy Butler, who told us some interesting facts about the various artists whose songs were being performed. For instance, I learnt that Freddie Mercury actually lived and performed in Liverpool when he was first starting out, and that the Beatles played at The Cavern almost 300 times.

Butler was a bit touch and go for me. Sometimes he seemed on top form, especially when he rescued the lull on stage after Murphy’s guitar wasn’t working properly, but then other times he kept stumbling over his words and you felt yourself straining to take in the information he was delivering. Judging on both the audiences and band members reactions to him though, he is clearly an integral part of the show and seems to thoroughly enjoy his role. 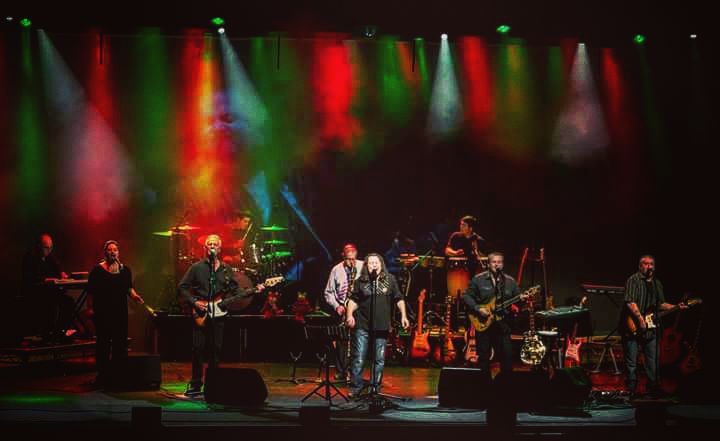 Onto the main man himself, Murphy. He is a man of impeccable musical talent. The way he plays with such effortlessness is so impressive you can’t help but feel admiration. His Joy on stage is contagious to both the other band members and the audience. The various guitar solos he takes on during the evening are all faultless, from Santana’s ‘Soul Sacrifice’, to Jimi Hendrix’s ‘Hey Joe’ and The Shadows ‘Wonderful Land’ each were as seamless as the next and were testament to him as a musician.

Alan Armstrong must get a mention for his turn in the spotlight too. One of the highlights of the evening for me, came from him, and this was when he led The Eagles classic ‘Hotel California’. He showed us why he deserved his place on the stage and his voice had quite a gritty texture to it, which came in even more useful later, when he took on Bryan Adams ‘Run to you’.

The song of the evening by far though, had to be Bohemian Rhapsody. It seemed very brave of the group to take that on, and I can’t imagine many to be able to do so successfully. Rob Shirley took the lead on this one, and what a job he did. His piano playing, his voice, and his all-round stage presence meant that he nailed the song, with the invaluable harmonies and backing from the others.

We heard many different singers throughout the show, and for me the top of the pile had to be Jade Tremarco and Gary Brown. Tremarco’s voice is one to be reckoned with, both when she is providing note-perfect harmonies like in Elvis’s ‘suspicious minds’ and taking on lead vocals, like in Fleetwood Mac’s ‘Chains’. She oozes confidence and sass, and seems perfectly at home on the stage.

Brown, who reminds me of one of the hairy bikers, was the voice of the evening for me. His was evidently saved for last for good reason, and I couldn’t see anyone doing a better rendition of the Gun’s and Roses classic ‘Sweet Child of Mine’ than him. He rocked AC/DC’s highway to hell for the last number of the evening and his natural place is most definitely on the stage.

For anyone who enjoys live Rock and Roll, it doesn’t get much better than this.