If you are reading this review to try to decide to see Brit Floyd, I will tell you immediately, they are so much more than a tribute act. They empower their stage and fill their venue with the kind of real essence of Pink Floyd that can only be conjured by an immense love and respect for their namesake, and very, very hard work.

How do you define them?

To answer that, you have to define Pink Floyd, which is a tremendous feat in itself.

To call them just a rock band would be almost an insult: the anthems they gifted to and on behalf of the masses over the course of nearly 50 years now have developed an ethereal, other worldly quality—Pink Floyd challenged and changed the music industry again and again at their peak and although others may have been inspired by and learned from them, nothing else produced in the last half a century has come quite close enough to surpass the original Pink Floyd.

But fans were definitely not disappointed last night at Manchester’s Bridgewater Hall. That notion wasn’t even entertained.

Brit Floyd has gathered much respect as a band. They have become known for delivering brilliant performances again and again, to such a standard that die hard Pink Floyd fans flock to their shows to revel once again in the music they grew up with. This music resonated so profoundly with hundreds of thousands of people not only for its transcendence of the music scene, but because it described and defined so much about their lives, their past, their present and their hopes and fears for the future.

This tour, aptly named ‘Space and Time’ for its journey back and forth through the best and more obscure years of Pink Floyd, takes fans first to 1973, opening with ‘Breathe’, ‘On The Run’ and ‘Time’ from Dark side of the Moon. Set to a dramatic light show that starts with a heartbeat, the collective anticipation of the audience is palpable—not in a frantic way: the music is building, reverberating through the atmosphere until it reaches the centre of you, but this is an audience set on not missing a thing—I look around and smile as I see almost nobody moving, such is their expectation and confidence in the next three hours’ experience. 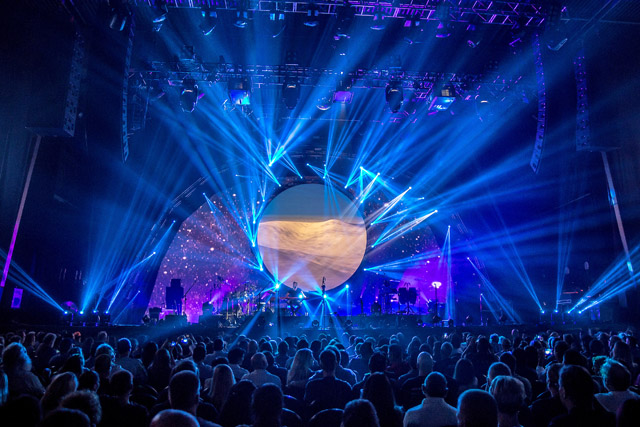 Angela Cervantes, who takes on the indefinable role of Clare Torry in ‘Great Gig in the Sky’ is superb in her unearthly rendition, followed by a note for note performance of ‘Shine on You Crazy Diamond’; the ‘Wish You Were Here’ album version rather than ‘Echoes’. Jay Davidson literally shines here with an incomparable saxophone performance.

Further hits are played, much to the delight of the audience, such as ‘Another Brick in the Wall part 2’, which was showcased alongside a re-animation of the original video, which still manages to strike chords of terror. ‘Money’, a massive hit from 1973 followed ‘Louder than Words’ from the 2014 album ‘The Endless River’, which, sat in between two classic tracks from decades ago, was a good tip of the hat to Pink Floyd’s continuing presence nowadays.

The first half concludes with a dramatic black out and into the darkness those first legendary chords from Wish You Were Here find they’re welcomed like old friends. This song meets a full standing ovation—obviously. Much credit should be heaped on the sound engineer, whose achievements in this spectacle are beyond his call of duty, although, he would probably insist it was merely his duty to deliver nothing less than a masterful display. It was commented among audience members that the transformation between ‘Have a Cigar’ and ‘Wish You Were Here’ was especially ambitious, using the same filter sweep effect used in the 1975 ‘Wish You Were Here’ album to great effect, giving the musicians time to switch instruments from electric to acoustic.

And then the theatrics really ensue. ‘Comfortably Numb’ is re-enacted with multi-instrumentalist Ian Cattell appearing centre-stage in a doctors white coat, tending to an unconscious figure slumped in an armchair which seems to have magically appeared, along with a lamp and a TV displaying the original 1982 Comfortably Numb video. Cattell’s voice is wonderfully reminiscent of Roger Waters and steps into the role, fully immersed from the word go.

His energy is infectious as he plays Pink ‘In the Flesh’ and the rest of ‘The Wall’ rolls on with other band members seamlessly tying their live performance with the images playing behind them. Damian Darlington plays the voice of the judge and Ido Scordo strikes a comic figure as the schoolmaster while Cattell shudders centre stage in apparent torment. This is pure acting: if there was ever a wall between ‘theatre’ and ‘concert’ it has been well and truly torn down by this point.

For the final mastery of melodrama, a mirror ball has been slowly lowering from the ceiling, and is now the glittering representation of that ever memorable ball of light from the 1994 ‘Pulse’ tour, which fans cheered and laughed to see brought back to life. David Gilmour’s guitar solo from that same 1994 tour is played exquisitely here by Ido Scordo, which had audience members cheering on their feet again.

My final thoughts on ‘Space and Time’: Brit Floyd are a band of immensely talented and phenomenally dedicated musicians who have crafted a show which doesn’t just mimic another, bigger version but brings music which is ‘bigger than all of us’ into the present, giving it new life, to be enjoyed for the 1000th time by lifelong fans and for the 1st by new generations.