Reality talent shows, and their stars, are hard to escape; and often failing to live up to the hype in real life. The Sons of Pitches, thankfully, do not fall into this category, proving their fame is built on talent and will likely exceed the clichéd fifteen minutes!

The grade II listed Epstein Theatre provides a beautiful backdrop for the gig. Theatres are tricky venues for live music as the seats and formality often sedate the audience, however, The Sons (as they’re affectionately known) manage to win the audience over. And by the group’s final song the audience are breaking theatrical convention and dancing in the aisles.

Newcastle trio Candi’s Dog provide support pedalling their likeable but forgettable melodic folky tunes. Their set features the added drama of a will he won’t he plot line, as the drummer grapples with the lethal combination of raked stage and drum-kit – thankfully the audience were saved a sweaty addition as he managed to keep himself and the kit onstage! – And a standout song in the lyrical Getaway.

When The Sons take to the stage they are slick and well-rehearsed, perhaps a little too rehearsed though a lively Liverpool crowd soon have them relaxed and engaging in humorous banter. They are confident performers commanding the stage and overcoming technical issues with panache and flair – one of the biggest laughs of the evening occurred when feedback interrupted a dramatic build into an original song and Joe B (of the six members three are called Joe!) delivered a perfect adlib highlighting his background as an improv performer. 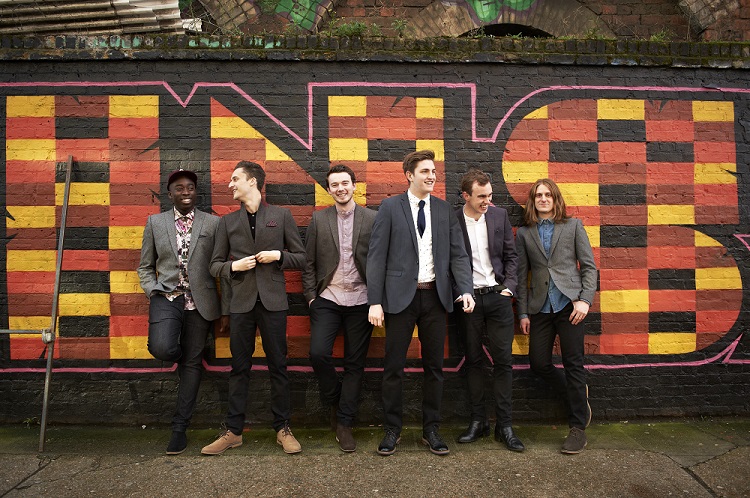 The group’s original repertoire lacks the polish of their cover work but shows potential. Yet it is in their energetic mashups (for which they became known on BBC’s The Naked Choir) that truly engage and entertain the enthusiastic audience. Their Boy Band Medley complete with emotive choreography, miniature stools and searching looks is beautifully judged, even as Jamie questions whether they can themselves can be classed as a boy band with their normal cars, unremarkable hair and beer bellies! Although anyone who’s seen the group will probably argue that their neat presentation is very much in the boy band vein.

In addition to their vocal skills the group have a flair for comedy (if you enjoy comparisons mix Pentatonix with Ylvis and you’ll get the idea) and the evening features two improvised songs, which will, sadly, never be heard again. The gospel styled ‘Scouse Brows’ song needed to be heard to be believed; and Joe B proved his ability to create under pressure in the second act’s snappily titled ‘Just finished mine. I’ve stopped for diesel, then I’ll eat yours.’

The Sons provide an entertaining evening of vocal delights and humorous exchanges. They are best when relaxed, enjoying the interplay with the audience and infecting us with their boundless energy. Minor technical glitches and the odd pitchy moment add to the live atmosphere, failing to detract from a unique and engaging performance.