The Billy Joel Songbook performed by Elio Pace and his band is highly energetic and extremely entertaining from start to finish. The show is a masterclass on how to put together the perfect programme, with just the right amount of well known, upbeat Billy songs and more intimate, relaxed songs with just Elio and the piano to offer something for everyone. What was particularly impressive was his success in saving the majority of Billy’s best hits for the last 20 minutes of the show, yet despite this never failing to retain the attention of the audience. His passion and appreciation for Billy’s music was inspiring and often moving at times and influenced the crowd greatly. I would imagine anyone who wasn’t a fan of Billy before will be after witnessing the amazing and accomplished Billy Joel Songbook.

Elio provides the audience with appropriate, nostalgic anecdotes regarding Billy’s life and his turbulent journey towards the successful career he achieved; aptly mentioning Billy’s desire to change from his classically trained routes to a rock musician after witnessing The Beatles on the Ed Sullivan show. Elio, along with his band, expressed great appreciation for the magnificence of St George’s Hall Concert Room and brought the stage to life with fantastic, live music and enthusiasm that cannot be faulted. 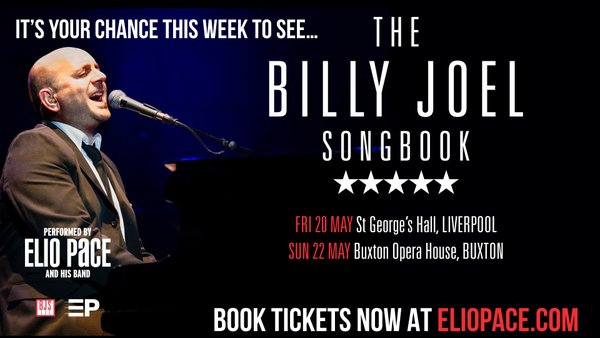 The skill of the band was remarkable, and particular mention must be paid to Frank Walden, a saxophonist who Elio Pace mentioned had previously toured with Amy Winehouse and is due to join Tom Jones on tour this summer. The calibre of the musicians was easily recognisable and added a special star quality to the show.

As Pace noted himself, it is hard to condense the works of Billy Joel into a single show. 12 albums packed full of beautiful music must have been torture for a die-hard Billy fan such as Elio to organise, however his success in achieving this is admirable. Favourite, well known hits such as Just The Way You Are, She’s Always A Woman, Uptown Girl and Piano Man as the encore had everybody on their feet. Despite the audience predominantly being of a more mature age, it was heart-warming to see so many couples energetically dancing along to the music in the aisles and singing every word. Elio Pace was very responsive to audience participation yet the show never lost its class or slipped into the atmosphere of a cheap cabaret. The talent of Elio and his band would not allow it.

Elio Pace and his band should be proud of the feel good vibe and energy they brought to the concert room on Friday night. They’ve managed to pull off an amazing show that will no doubt achieve incredible success as it continues to tour. Those who are fans of Billy Joel will thoroughly enjoy Elio Pace and his nostalgic, accomplished songbook of Billy’s best known, brilliant hits and those who are not fans will come away with a new found love for the singer songwriter. Elio Pace’s passion for Billy is infectious and his show is unmissable.