Visiting the theatre at the end of Blackpool's North Pier for the first time, firstly I was surprised at the vast size of it, secondly how wonderful it is that several hundred people have taken the decision to brace the howling winds and rain, to trundle down the long pier, with the waves crashing all around below, to watch the pantomime 'The Wizard of Oz.’ Yes, this is summer! Is it all going to be worthwhile?

The show starts off in a Kansas farmyard with Dorothy, her Aunt Em and Uncle Henry and farmhands discussing the impending cyclone but portrayed in true panto style with great song and dance routines. The scenery is good and special effects with pyrotechnics and smoke enhance the show.

As the cyclone hits, Dorothy performed by Pippa Smith, is swept away to Munchkin Country in the Land of Oz She is greeted there by Glinda (Bessie McMillan) who tells her that the farmhouse has landed on the wicked Witch of the East and killed her and in doing so has released the Munchkins from her rule. Surprisingly Dorothy in this production has blonde curly hair and not the traditional dark plaits which appears a little strange and more suitable with Goldilocks but despite this, Smith is able to play the character convincingly. 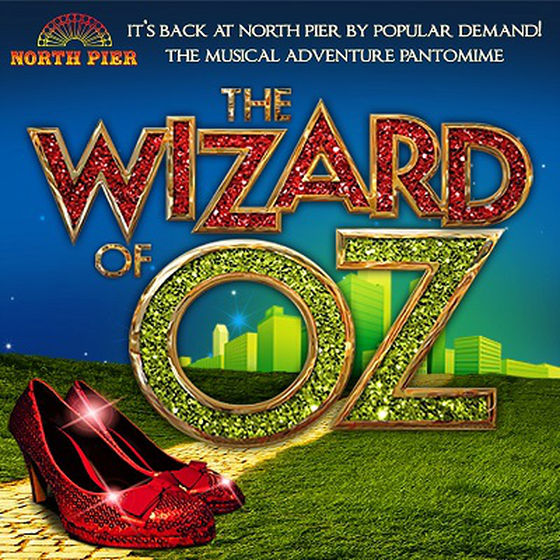 Although there were occasions when McMillan’s voice was overpowered by the music during some of the songs she is delightful as Glinda. The Munchkins in this show are children from local Studio 15 Dance Academy who celebrate their first anniversary this evening, so congratulations to them. There are lovely performances from each child (I watched each one individually and they all seem to be enjoying themselves too).

Dorothy is rewarded with a pair of magical red shoes that belonged to the Witch of the East. As she wants to return home to Kansas, Glinda tells Dorothy the only way she can return is to go to the Emerald City and speak to the mighty Wizard of Oz who can grant her that wish. But all panto have an evil character and this one is no exception in the form of The Witch of The West who is intent on seeking revenge for the death of the Witch of the East. She wants the red shoes for herself and plots to get them from Dorothy at every opportunity.

Nik Grundison has a really evil cackle and judging by the loud booing, hissing and insults from the audience at her every appearance, she is truly the Wicked Witch of the West. Whilst it is lovely to see the children of the audience getting so involved, the heckling was so loud at times that some of the dialogue was lost, but no matter, the tale could still be followed. It's what panto is all about after all!

The story continues with Dorothy's journey to seek out the Wizard and meeting along the way a Scarecrow who needs a brain, A Tin Man without a heart and a Lion desperately seeking courage. She encourages them to join her and see if they too can be helped by this wonderful man the Wizard of Oz.

Reece Sibbald, a North Pier favourite has been perfectly cast as the scarecrow (and also dopey Hickory in the farm scenes). It is easy to see why Sibbald is a popular choice as he interacts with the audience and in a change from the usual water attacks upon the audience during panto, he 'assaults' them with something completely different and something I have seen not seen done before, but which brings cheers and much laughter, although I think those on the receiving end can't quite believe it! There is a brilliant scene when he is 'cut down to size' by The Witch of The West which is incredibly funny and again performed really well.

The Tin Man is given full credibility by Harry Moore (also one of the farmhands at the beginning) who has to be the tallest Tin Man I have ever seen but this really works for the character and his costume is brilliant.

Mervyn Francis 'roars' onto the stage although maybe a meow is more of an appropriate word as our loveable Lion is lacking in courage, but he is an instant hit with the audience. Again there is a fabulous costume and along with the Scarecrow, Tin Man and Dorothy they delight the audience with the song 'Together' which is a theme song during the panto.

Steven Hall performs as the Wizard of Oz and also did an unusual dance routine that got him into the finals of Britain's Got Talent. Thanks to that show he is now doing what he always wanted to do and that is to appear on stage and entertain the crowds, tonight he certainly does. He also appears as several other characters during the show. He sets the trio and Dorothy the task of getting the Witch of the Wests broomstick before he can grant them their wishes.

There is a break from the traditional songs associated with the Wizard of Oz such as 'Somewhere over The Rainbow' and ' Follow the Yellow Brick Road' and I do feel they were missed. Also it was a shame that there was no guest appearance of 'Toto' and I did hear several youngsters ask where the doggy was. But this is the only disappointment and after the show many of the cast members braved the elements to pose for photographs and sign autographs. As for my first question...'Is it all going to be worthwhile?'   Shouts of 'Oh Yes It Is’ will surely resound along the pier and promenade of Blackpool this season!

For tickets and more information on the show: http://www.northpierblackpool.co.uk/#!wizard-of-oz/qnd7d or call 01253 623 304. You can also book in person at the box office on the pier.