Pantomimes' larger than life style and often seemingly improvised approach can give the misconception that they are somehow 'thrown together' and can be somewhat 'cheesy'. However, done well they are a specialised art. The difficulty is you never know which you have gotten until you are in the midst of the performance.

St. Helens Theatre Royal opened the Easter Panto Season with Beauty and the Beast, the audience comprising of a Bevy of mini Belles, as many youngsters came along in character.

The storyline took several deviations from the traditional plot. The key to this detour was the introduction to our 'baddie', Gaston's mum Madame Botox, played by Hannah Potts who's delivery of a Cruella De Villesque performance was convincing as the evil matriarch who was determined that her son would get the girl!

TV 'celebs' who try their hand in the panto circuit, can be a tokenistic gesture to get the crowds in and can backfire in terms of what they offer to a performance. However, Amy Thompson, a presenter for Channel 5's 'Milkshake', was a perfect choice for the part of the beautiful Belle, not only looking the part but she acted well and had a had a lovely singing voice. 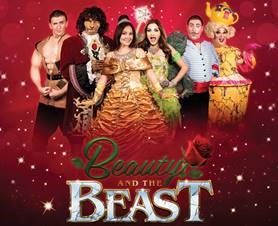 Another TV 'celeb' was 'Big Brother's' Nikki Graham, who played the part of Fairy Rose, bringing her own contemporary twist to the usual 'sweet' role, by adding a bit of attitude! With several references to their celeb role's being woven into the panto script, adding further comic effect, meaning that all in all the celebrities pleasantly exceeded expectations.

The scriptwriter Liam Mellor also played the part of French Frank with his love interest Potty Polly being played by local talent and the Theatre Royal's hilarious 'Resident Dame', Simon Foster. This comic duo clearly seemed to be enjoying themselves, which was infectious. Inevitably some of the funniest parts of the show was during the audience participation and the pair's quick thinking ad lib's when interacting with the audience and just the right smattering of adult humour had both children and adults alike chuckling. With pair providing the framework for the progression of the story as well as the comedy value.

Philip McGuinness played the part of the self absorbed Gaston well, with a solid performance by Richard Hazlewood. As Prince Benedict / The Beast.

There were genuinely no weak links within the cast and the performances all felt fresh and energetic, with a backing-track of contemporary pop songs that fitted with the storyline, all of which the young audience knew.

Choreography was energetic and effectively performed by a small ensemble cast with added 'cute value' being provided by the younger dance group. Although it would have been useful to know which of the groups performed today so that a direct mention could have been given to them.

The show was just the right length for the younger audience, with the first act being 50 minutes and the second being 40 minutes.

The only slightly disappointing part was the anticipation around the 'wedding', was a bit of an anti-climax and seemed almost incidental with Belle wearing her trademark dress rather than a wedding gown.

However, this didn't detract from Beauty and the Beast being Pantomime at its best, it had the lot; Pyrotechnics, technicolour costumes; plenty of sparkle and glitter; a good old love story; baddies versus goodies and all round feel good factor. To paraphrase French Frank 'How we do?'... Crackin'!

The show is on until 23rd April and unquestionably well worth a watch. http://www.sthelenstheatreroyal.com/