Throughout 2015 I have been to see virtually every production the Oldham Coliseum have staged and never have I been failed to be impressed. Now to round the year off I have seen their crowning glory, Mother Goose!

If you were able to look up traditional pantomime in the dictionary, the definition would be Oldham Coliseum. Everything about this show just screams tradition. There are no fancy special effects (apart from a lightsabre perhaps), no “star names” and no multi million pound sets. You have just got plain and simply, talent and good old fashioned theatre complete with a fair splattering of innuendo.

Written by Fine Time Fontayne and Kevin Shaw, this is the traditional story of Mother Goose. Boy meets girl, they fall in love but are forbidden to marry until a goose lays a golden egg. We are all I am sure familiar with the tale so I don’t need to reiterate it or spoil the plot, suffice to say all kinds of trouble awaits as this 2 hour “eggtravaganza” unfolds.

The show opens with perhaps the best baddie of them all Andonis Anthony, this year playing the Demon of Discontent. Anthony has the audience screaming in disapproval of his evil plans from the second he takes to the stage in his menacing costume and perfectly trimmed beard. On the good side Kaitlin Howard as Fairy Feathers attempts to appease the evil with varying degrees of success, but as in every pantomime good triumphs over evil eventually.

Forbidden lovers Colin and Colinette are played by Justine Elizabeth Bailey and Nicole Evans who gel well together although not as much is made of the relationship as in other pantomimes. Both have superb singing voices as demonstrated during their first half duet which fell a bit flat mainly due to the number of school children in the audience this afternoon who seemed to switch off a bit during this romantic bit! 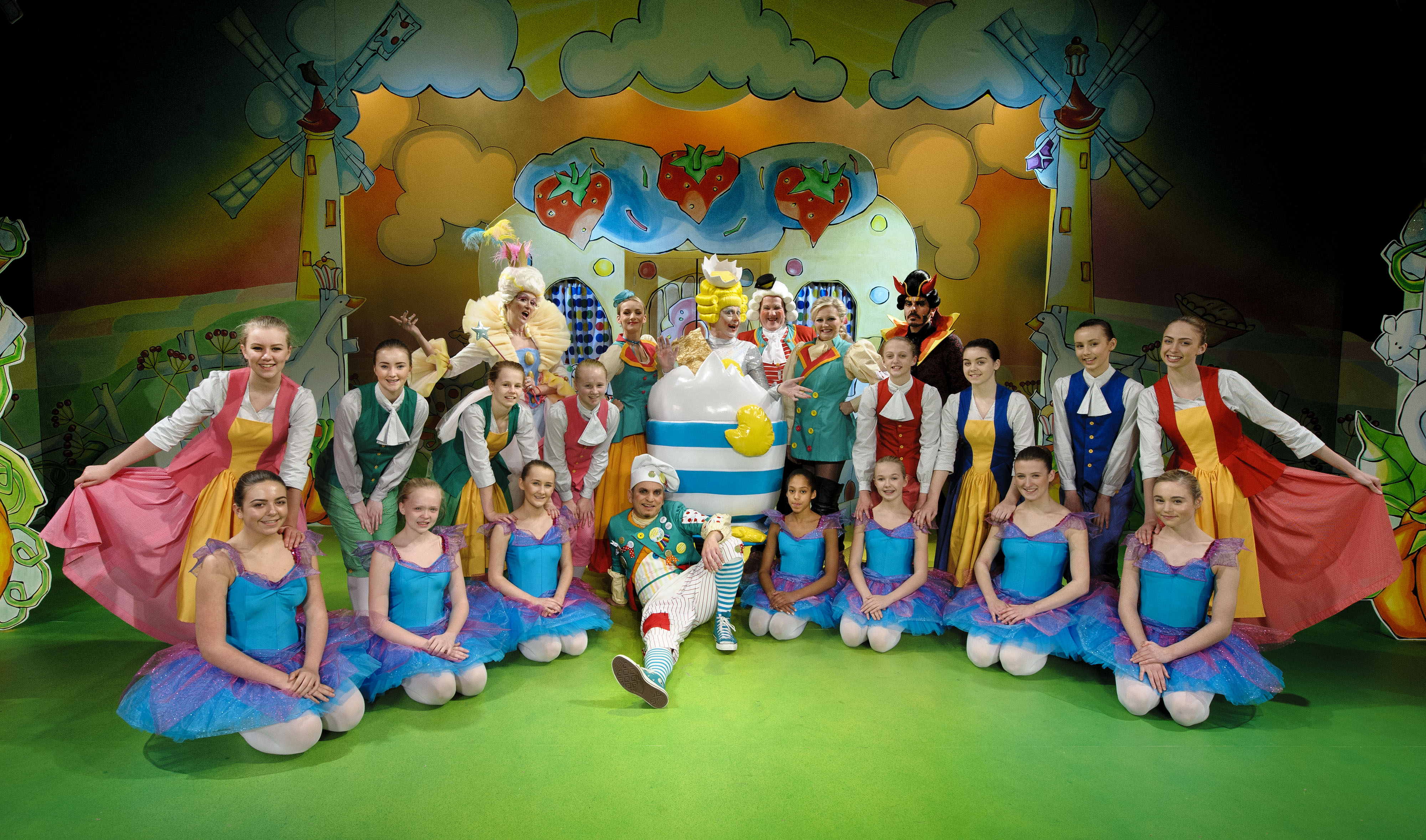 Colinette's tram spotting Father Squire Grabbit, who forbids the marriage until a golden egg is laid is played by Simeon Truby. The highlight of his performance was a tongue twister of a song which named every station on the current Metrolink network, no easy task I tell you!

Richard J Fletcher as Billy Goose is the mad cap wannabe Master Baker and is instantly loved by the entire audience as we are enrolled into the “Geese Army”. His madcap antics and athleticism on the stage make him one of the stars of the show. The (messy) scene he shares in the bakery with Bailey and Fontayne is an absolute joy to watch.

And that brings me onto Fontayne. As well as writing this year’s production he stars in it. A veteran of Coliseum pantomimes, by my calculations this is at least his sixth, he commands the stage throughout. He is the epitome of pantomime dames and only upstaged by his flamboyant costumes that included an egg cup, My Little Pony and a Christmas cracker. Even when his lines momentarily escaped him he held court over the rest of the company as they burst into fits of laughter.

A simple yet colourful set by Celia Perkins lit beautifully by Douglas Khurt is a visual feast and the live 3 piece band led by Dave Bintley are faultless throughout, although I will question his decision on who was the loudest side during the song sheet purely due to me being on the losing side!

Kevin Shaw has delivered a gem of a pantomime once again at the Oldham Coliseum and with over 80 performances on offer this season there is literally no excuse not to get to Oldham and see it. Personally I am counting down the days until next year’s offering, Sleeping Beauty opens.