The art of pantomime is a key component in the lives of many who follow a lifestyle of loving the festive period and it is also loved by those who are not partial to or interesting indulging in the commercialised Christmas cheer.

With nothing better than a live performance, no longer is the genre dependent on a fairytale story that is laced with old gags and slapstick comedy. In fact some don’t follow the rulebook of proper pantomime production at all. Extravaganza Productions has a constantly positive reputation for producing quality family pantomimes at Stockport’s Art Deco super cinema and theatre for a quarter of a century. With the foundations and joint directorship of veterans Richard Chandler and David Vickers and the extremely capable hands of professional dancer, choreographer and teacher James Robinson and Musical Director Andrew Saunders, you have no doubts about flaws in timing, ‘performing arts’ or a lack of pure feel good entertainment. The only downside to their presentation of Brothers’ Grimm’s story of innocent princess Snow White is that the story is disjointed in parts with the division down to the addition of random yet entertaining scenes, I guess, to cover set changes. The programme states ways in which the original story is told but very few of them are included. 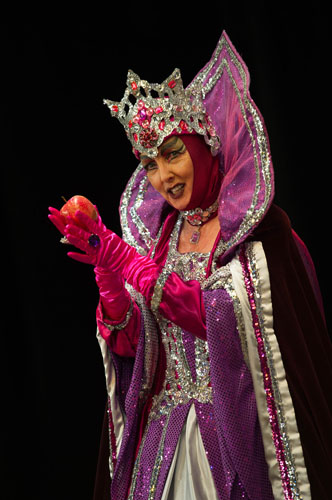 In a show as fast paced as this, and with the limited rehearsal timescale given, the high quality of shows demands the talents of trained and determined performers. These come in the forms of third-year students from Essex’s Wilkes Academy and Masters Performing Arts College for the ladies and gentlemen respectively. One performer is a lady I have had the pleasure to be aware of in my time performing in Youth shows and it was a pleasure to see Emily Billington again after a period of silence - I didn’t even know she was studying there! With James’ seamless and uber precise coordination of moves, to fairly modern ballads, performed effortlessly by the leading members of the cast, the well-chosen triple-threat performers should be proud to represent the proof of those who strive to succeed in the arts, in a world where a dark cloud hangs over a career path that does not guarantee security. These guys know their stuff, work hard and enjoy it and should be commended for making it look so easy.

The show opens with Evil Queen Morgana - performed by the great Kim Hartman known for her role as Helga in the BBC comedy ‘Allo Allo’ - getting the audience in the palm of her hand (although she did have to lead-in the first “Oh No It Isn’t”) consulting the ‘Magic of the Mirror’, after the powerful and brilliant sounds of the 4-piece band who provide the well-played, carefully chosen and excellently executed soundtrack to an energy-filled show. We are then treated with a dance number that sets the level for the rest of the show - excitement and flawless ‘commercial/modern’ dancing of the highest level of a local panto, to match that of seasoned professionals like their leader - this is the point when you relax, have faith and are drained of all doubt that the show will not deliver. Here we first meet Snow White, played perfectly by the Beautiful - to quote the script “even in death” - Plaza Princess of Panto, Becky Bennett as she and the palace staff prepare for the royal picnic, awaiting the arrival of Prince Rupert - the charming and handsome Bradley Clarkson - whose solos and duet with Becky are outstanding, as are those of Becky herself with the tracks of Westlife (To Be Loved) - of which there is then a nice reprise - and another poppy ballad called ‘Turn It Up’. 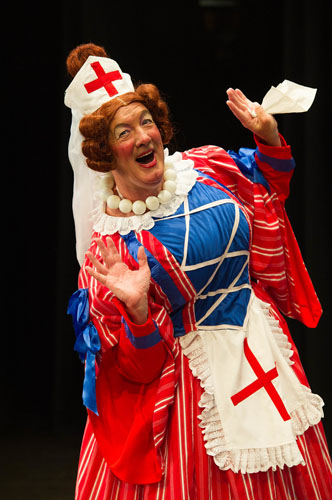 The comedy characters come by way of Muddles The Jester (Bradley Thompson) is does very well as ‘the kids’ favourite’, with good responses from the adults in the almost full audience, and Brookside’s Jimmy Corkhill - Dean Sullivan - as the camp, constant costume-changing dame Nurse Glucose who is missioned with many of the panto ‘usuals’ like sweet-throwing, staring off the quartet “12 Days of Christmas” and taking a fancy to the front row heartthrob, referencing him at each entrance from then on - be warned!

Morgana’s Huntsman (Jake Panetta) - who doubles up as Rupert’s father, King William of Sandrasand - should be welcomed to the cast of his third appearance in a version of the show, originating from the same Southern areas as the dancers.

We couldn’t review such a show as this without mentioning the 7 characters who collectively share the title with our leading lady - the dwarfs! With Graham Hughes as ‘Moody’, Fergus Rattigan as ‘Brainy’ and Jack Hilton ‘giant dwarf’ stature naming him as ‘Smiley’, we also enjoy Binde Johal’s ‘Goopy’, Niall McVeigh’s Tisher, Peter Dunter’s ‘Snoozy’ and Ben Holmes’s muted ‘Dozey’ as they all perform the Cha Cha Slide in the diamond mine.

Going back to the dancing routines, some of the randomness is in the form of a group of gypsy whose dancing has the likeness of male Russian Cossacks and female seductive dancing of George Bizet’s Carmen, as well as the beautifully performed ballet in the woods that was the way of including the illumination/UV scene. It was nice to hear all of the leads sing, as well as one of the dancers.

Overall a spectacular production with all the right components of a true night’s entertainment, with a ‘refreshed’ approach to the story we are use to through a variety of styles presented by a group of exceptionally talented people who clearly infectiously love what they do.

Leave all stresses at home, in the car or at the theatre door and allow yourself to get lost in the magic of pantoland, release your inner child and meet some special people along the way. I can’t wait to see what Extravaganza production flies into Stockport next year… 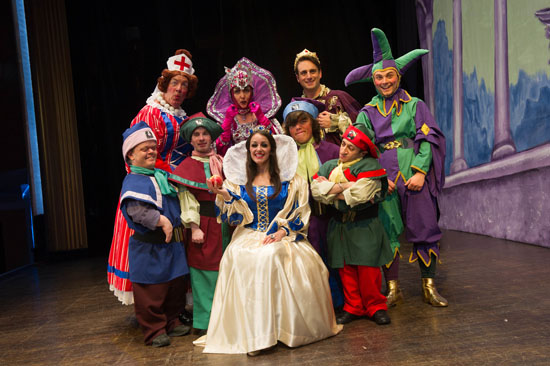