This was my first experience of a production by Tell Tale Hearts and Piff Paff and I can honestly say that I thoroughly enjoyed every minute of it. The tale of Snow White is one that has been imagined and reimagined so many times that it is hard to picture that there is any new way for it to be told, and yet I found myself on the edge of my seat as I was trying to anticipate the next plot twist. The way that the cast interacted with the audience and employed traditional pantomime techniques to evoke laughter, and crowd participation really emphasizes the fact that Tell Tale Hearts work closely with and keep children at the heart of everything they do. Yet at the same time the incorporation of physicality and multiple forms of storytelling i.e. the shadow puppetry scene made it inventive and enjoyable for the adult members of the audience at the same time.

The plot differs vastly from the classic ‘Disney’ tale and Instead of the tyrannical queen we have the talented diva, Mystique Stardust, whose lust for the limelight, and fear that her career is on the decline, drives her despicable deeds against the naïve and meek Snow White. The traditional dwarves have been replaced by six Yorkshire miners who moonlight as Jazz musicians in a band called the Coal Faced Crocodiles. The story begins by introducing us to the six miners: Lamplight, Blaster, Smasher, Canary, Dizzy and Sootie, who take centre stage in narrating the entire story line. They then embark with us on a surrealist quest through time in order to rescue the fair Snow White from the evil Mystique’s cursed mirror.

Though in this performance there are only six instead of the traditional seven miners, and at times due to duplication of character roles there were only four or five, due to the larger than life personalities presented by each individual was more than sufficient to make up for the missing character. 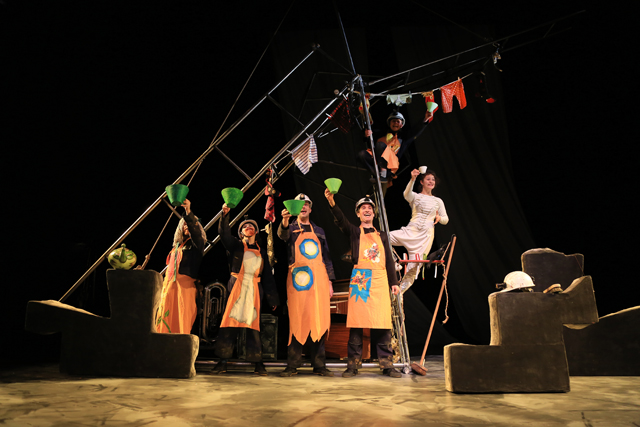 Special mention has to be given to Francesca Dunford’s portrayal of Snow White, she perfectly embodied the earnest naivety that the role called for and yet as the play progressed this was undercut by a noticeable and growing strength of character. This character development was endearing to witness and greatly helped move the plot forward. In addition to this her graceful and at times terrifying aerial acrobatics served as a beautiful means of telling a story and creating beautiful imagery as well as creating dynamic and inventive scene transitions.

Eleanor Hooper particularly shone in her portrayal of the vindictive diva Mystique stardust. Right from the first moment she stepped on to the stage she embodied every stereotype of the ‘diva’ character from her ostentatious wardrobe to her overtly dramatic stage presence; which by the end of the performance was even eliciting ‘boos’ from the crowd.

The set, designed by Pete Gunson and Eleanor Hooper, was very minimalist and industrial; however with a little manipulation and the addition of some simple props the cast were able to provide imaginative and lavish scenery that complimented the choice of costume perfectly as well as the intricate physicality. The only criticism I have of the production is that occasionally the tempo of the performance was disrupted by the complex changes of scenery and this gave the whole performance a rather stilted feeling, however as soon as the plot resumed I was once again absorbed in the story. 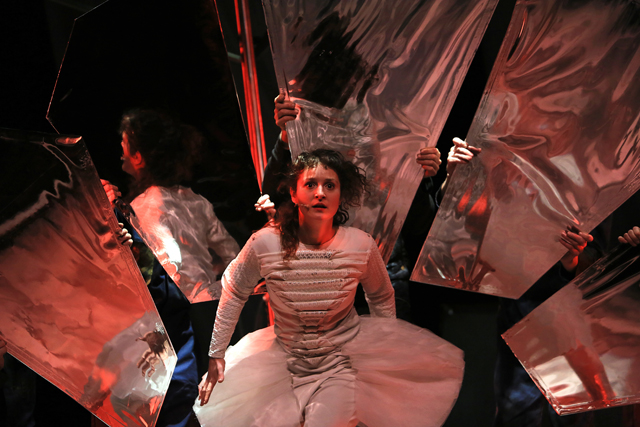