Cinderella at The Epstein, brought to us by LHK Productions, is a modern twist on a well-known and beloved fairy tale, Cinderella. We know how the story goes, a beautiful down trodden young girl is bullied by her ugly step sisters and devious, evil Step Mother until her fairy godmother steps in and saves the day, transforming her into a beautiful Princess fit for any Prince’s love and attention. He searches the kingdom far and wide for the beautiful woman who abandoned him at the ball and left him all alone with only a single glass slipper. Of course, he returns the slipper to the rightful owner, they fall madly in love and they all live happily ever after. This all stayed true to form, except thrown into the mix were a couple of modern pop favourites such as ‘Love Me Like You Do’ by Ellie Goulding and ‘Hold My Hand’ by Jess Glynne which was very fitting for a young, modern audience.

As we all know, the reality TV star Calum Best is not famed for his musical talent, so those going with grand expectations of a top notch vocal performance will be disappointed with 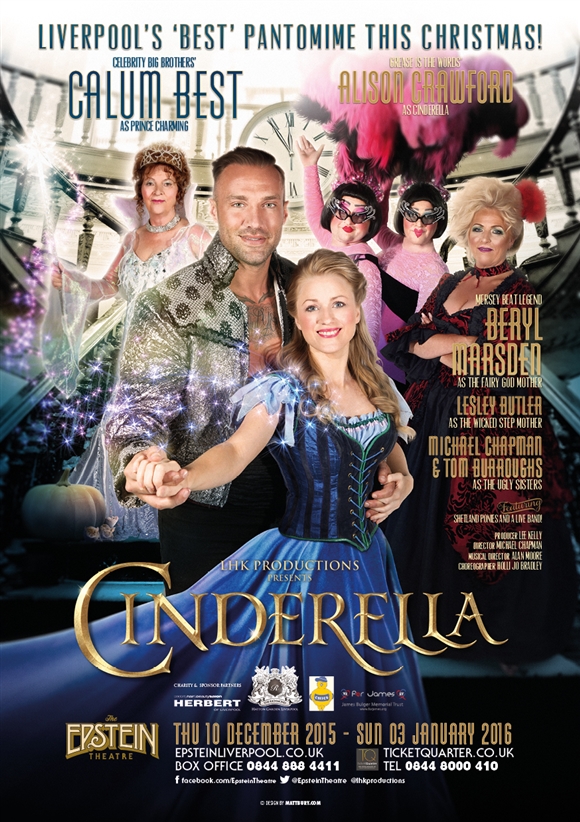 that he has to offer. However, it partly added to the charm of the whole thing. Many references to the star’s good looks were made throughout the show and were excitedly encouraged by many females and males in the audience. Considering he is a new comer to the pantomime scene, he did manage to bring charm to the character of Prince Charming and was certainly enjoyed by many as indicated by the frequent cheering and wolf whistling throughout. There was certainly something for all and the production wasn’t there just to please the kids, especially with several ‘near the knuckle’ jokes that would (hopefully) have completely passed the innocent children’s minds in the audience. They were probably so enraptured by the beautiful set designs, lavishly embellished costumes and the charming elegance that oozed from the shows leading lady, Cinderella, played by Alison Crawford.

Buttons is always a crowd favourite and he certainly did not disappoint in this production with an outstanding performance from Lewis Pryor. He never failed to get the audience involved in true pantomime fashion and I particularly enjoyed his rendition of Black Magic by Little Mix which was full of laughs for the audience to enjoy. He’s a star with a bright future and definitely one to keep an eye on! I can see him as a Prince Charming in the future, but regardless he brought so much love and life to the character of Buttons.

I can’t talk about this production without giving a big mention to the Ugly Step Sisters, played by Michael Chapman and Tom Burroughs who had me crying with laughter many times. Hilarious and full of fun whenever on stage, and particular props to the costume department who got their poodle and Heinz baked beans costumes spot on. A particular highlight was when one of the step sisters decided to hop on to the stage with a leg stolen from a mannequin in order to fit into the glass slipper perfectly. Comic genius!

The performance was packed full with laugh out loud moments, my favourite being an exhaustingly hyperactive version of ‘The 12 Days of Christmas’, and provided brilliant, heart-warming family entertainment perfect for this time of year. Cinderella will continue to be performed at the Epstein until Sunday 3rd January 2016 and it’s not one to miss!