Roald Dahl books have delighted children and adults alike like no other child's author ever could, his tales of eccentric characters and plot twists were a staple in my childhood and I think almost everyone can say they have a certain favourite Roald Dahl classic which they've read more than once or twice, so I was thrilled to discover that another of Roald Dahl's delights has been adapted for the stage, this time the charming and often overlooked; Fantastic Mr Fox.

This is a very slick, very impressive production; right from the opening monologue of the tweeting birds right through to the very end with the farmers in the rain, its worth applauding how well they have adapted this story to the stage, of all the Roald Dahl classics, I did have my doubts about how well this particular story would convert to the stage but those doubts were dismissed in the very first five minutes and part of that is due to the fantastic score written by Arthur Darvill, the songs are witty and fit the story yet still pack a punch delivered incredibly well by the entire cast and live band. 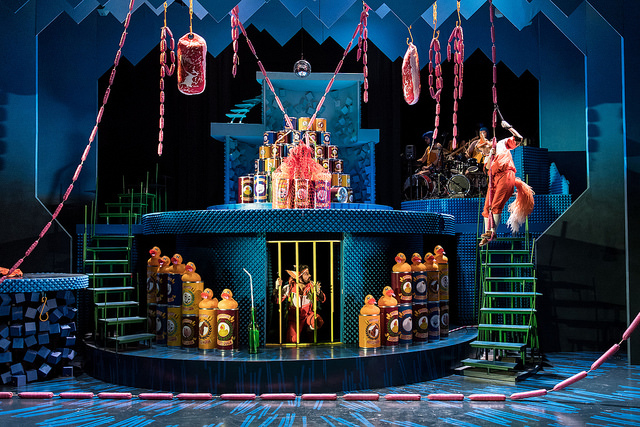 The cast make this production, the title role; Mr Fox is played by the very likeable Greg Barnett alongside Lille Flynn as Mrs Fox, they show great chemistry along with their on stage 'Kit' played by Jade Croot who is definitely a star in the making.

The star of the show for me had to be the extremely funny Sandy Foster in the role of Rabbit. Her facial expressions, her energy and her cheekiness made her a huge hit with the audience; both kids and adults alike throughout the story.

The audience are taken on a journey with Mr Fox and his woodland friends as the 3 intimidating farmers close in on their homes and life's, Richard Atwill as Farmer Bean plays the almost perfect baddie, very menacing and plays it with real flair, so much so you'd believe he really was an evil farmer after tonight's performance.

So the songs are worth listening to, the cast are well worth watching, it's ticking all the right boxes, add to that an ingenious stage design which is all moving, all lighting and you've got the perfect family musical.

Hats off or tails off as maybe more appropriate must go to the wonderful job Sam Holcroft has done in adapting this for the stage, it's like it was always meant for the stage, the kids in the audience loved it and the adults even more so, partly thanks to a couple of  innuendo jokes and winks.