Shakespeare’s Othello is a tragedy which explores timeless themes of race, trust and fidelity and Verdi’s operatic version adds a mesmerising backdrop of powerful music. Birmingham Opera Company’s production is a unique modern interpretation which immersed its original audience within the action of the story and exposes the darkest elements of the story in shocking detail. The opera is sung in English, with occasional subtitles which turn on and off at seemingly random intervals.

The opera is performed in a warehouse, with bare brick walls and a blood red carpet, with a live orchestra conducted by Stephen Barlow. As part of the broadcast we see the bewildered and shoeless audience enter the performance space and merge into the Chorus made up of 250 people. It was clearly the intention of Director, Graham Vick, that the audience would be entirely immersed in this performance as you can barely tell where they end and the cast begin. Inevitably therefore, much of the atmosphere which the original audience would have experienced at this production is lost by watching the broadcast version. It is unfortunate, but you cannot help but feel you are missing something watching the recorded version of this piece; that you have been pushed out of an intimate and overwhelming experience which could never be captured on camera. 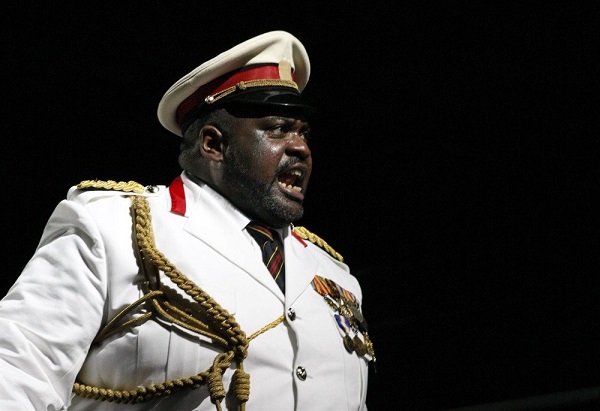 The opera opens with the storm which brings Othello’s (Ronald Samm) ship to Cyprus, following his recent naval victory. Excellent use of lighting creates a wonderfully realistic tempest. The atmosphere of the warehouse is enhanced with industrial objects being used to create the scenery. The building creates an echo which augments both the orchestra and vocal performances generating a sense that the performance is within a much bigger and open space. The juxtaposition of this and the clearly visible crowd, reflects the themes of trust and deception of the opera well.

Samm is imposing from the moment he enters, with an incredibly strong stage presence. The powerful and often ominous music emphasises his importance. Equally imposing is the manipulative and sneaky Iago (Keel Watson), whose viciousness oozes from him throughout his performance. The relationship between Samm and Watson is outstanding and they create the sense of Iago breaking Othello down gradually extremely well.

The hedonistic victory party in which Iago begins finalising his schemes features some exceptional choreography and stage fighting. The trusting Cassio (Joseph Guyton) contrasts with both Othello and Iago, portraying a lovely sense of naivete and innocence. Antonia Sotgiu, as Emilia, also gives a strong emotional performance and she is able to convey abject horror and overpowering anger with the most subtle of looks.

The chemistry between Samm and Stephanie Corley, playing Desdemona, is wonderful, the affection between the two feeling entirely genuine and the dark side of their relationship being filled with palpable anger and fear. Their vocal performances are also particularly strong with their voices being beautifully matched. The production acutely explores domestic violence and the role of control within relationships. There are some very brutal moments which are commendably performed by Samm and Corley.

Othello is a tragedy which is made all the sadder by the end result of the story being so eminently avoidable. This production drags that point to the forefront, proudly displaying how terribly pointless all of the anguish is. Vicious, shocking and unashamedly ruthless, this is a compelling and gripping piece of drama.

Othello is available to watch on BBC iPlayer until 19th July 2020 https://www.bbc.co.uk/programmes/b00yzgpl