The Lion, The Witch & The Wardrobe - West Yorkshire Playhouse, Leeds

When CS Lewis wrote this book that has spoken to generations of readers he created a world that needs a sure guide which makes hiring multiple award winner Sally Cookson to direct this version a very wise move.

Cookson is big on devising work with her team, which usually sends my blood cold, as it can mean that the creative team could disappear off on some very unhelpful tangents, but Cookson - and her writer in the room Adam Peck - have stuck pretty much to Lewis’ original story resisting the temptation to tinker too much with a text that has stood the test of time.

From the get go Cookson brings the audience in as we join the four Pevensie siblings on a station being evacuated during the second world war, which has echoes of the disorientating and scary reality faced by far too many of today’s children.

Peter, Susan, Edmund and Lucy end up in the mansion of an eccentric Scottish professor where they find a magic wardrobe that transports them to another word called Narnia. The Narnians live in an eternal winter – without even a Christmas – thanks to the wicked White Witch, and everyone is waiting for the lion Aslan to return to free them aided by the plucky children. 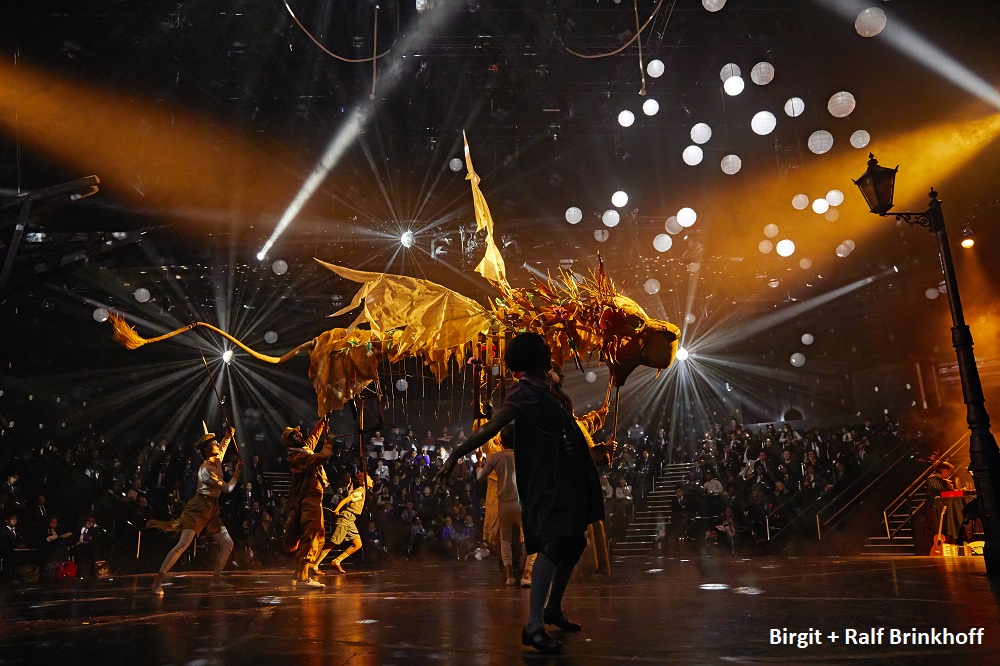 I was initially comfortable with Cookson’s decision to cast adults as the siblings until my 13 year old pointed out it didn’t work for her as they are ‘grown ups’, and she was right. It would be have been a far more interesting decision to cast children in those roles as they would have brought genuine innocence, and a sense of jeopardy to the bitter, often bloody,  battles for Narnia’s soul.

That said the athletic John Leader is perfectly venal as the treacherous Edmund clearly traumatised by his evacuation, and newcomer Cora Kirk brings a lively spirit to the youngest sibling Lucy who proves the truest of all four.

Where the devised approach pays off is this show literally fizzes with ideas like the Narnian animal resistance movement popping up out of holes in the black stage.  The moment when the White Witch in a rage at the return of her leonine nemesis rises up into the Quarry rafters is breath-taking as her skirt billows out across the vast space before sinking back into a hole to continue her mischief.

The energetic cast are aided at every turn by War Horse designer Rae Smith's dazzling ideas - one moment creating the snowy landscape of Narnia with a few white sheets before taking us off to the cosy subterranean home of the friendly fawn Mr Tumnus. This is the first time the Quarry has been used in the round (more please, as it really works) and Smith makes use of the extra space as the impressive aerial performers transform from statues in the witch’s castle to their old forms all the while hanging from ropes in mid-air.

Long-time Cookson collaborator Benji Bower turns in a score full of beautiful folk songs, pulsing synths that drive the climactic battle scene and even a jaunty turn from a clog dancing Santa wielding an accordion celebrating the return of the seasons.

Where the casting really works is bringing in children’s TV veteran Carla Mendonca as the White Witch adding just enough menace for a mixed house of big and little Aslan fans. The saintly lion is represented both by an impressive puppet manipulated by five skilled puppeteers led by Craig Leo, and old hand Iain Johnstone’s deploying the full range of his rich voice wandering the stage before the Christ like lion sacrifices himself to save the world.

Lewis has been poorly served in previous versions - especially the dreadful film that replaced storytelling with too much CGI – and Cookson’s surest touch is dispensing with cheap tricks forcing us to use our imaginations from the moment the evacuation train leave the station to the climactic battle.

So if panto isn’t your bag this bold, and always imaginative, version of a timeless classic is an option that satisfies those of us who first went to Narnia nearly half a century ago, and a teenager like mine who has never read it.