If there was ever a musical to make you smile, it is this one! During the performance of Hairspray this evening at the Sheffield Lyceum Theatre, I was captivated with the perfect harmony of explosive musical numbers and a powerful narrative, still relevant today with a strong moral to learn. The 1988 cult comedy film starring Ricki Lake influenced the powerful stage musical, staying true to the theme of acceptance and celebration of diversity. Hairspray first opened on Broadway in the summer of 2002 with huge success winning eight Tony Awards in its first year! Director and choreographer Adam Shankman quickly recognised this huge success and a developed a film adaptation in 2007 starring a number of Hollywood faces including John Travolta and Queen Latifah. Recently, NBC also saw the potential of this infectious production and broadcast ‘Hairspray Live!’ in December 2016.

With a setting of Baltimore USA during the 1960s the show does not hide away from the prejudice shown to many during this era. However, instead of focusing on the struggle and pain, Hairspray strives to highlight and revel in the diversity within each of us, and encourages the audience to look forward, not back. The year is 1962 and Tracy Turnblad is not a girl to take no for an answer or hide in the back of the room! Her personality and talent is almost as big as her hair, and she is on a mission to renovate National Television to recognise the value of individuals, despite their beauty, size and race. 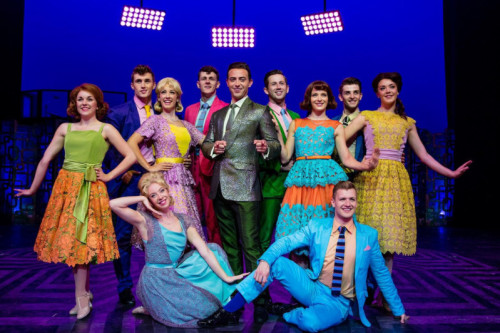 In the opening number, Rebecca Mendoza drew our attention in her lead role of the delightfully cheery Tracy Turnblad. This tour is Mendoza’s professional debut to theatre, and her animated energy certainly brightened the stage. I did feel there were moments of unnecessary slapstick humour in Mendoza’s interpretation of the role, but her musical numbers were full of character with a confident vocal performance. One duo that delivered a perfect lively yet loving relationship were Matt Rixon (Edna Turnblad) and Norman Pace (Wilbur Turnblad). Their hopeless and comedic interaction were some of the stand out moments of the performances, drawing the biggest laughs and applause from the audience.

A show such as Hairspray is reliant on the ensemble cast to create the energetic atmosphere throughout the production, with fantastic musical numbers in every scene. Layton Williams was clearly eager to display his impressive dancing ability in his role of Seaweed; he successfully communicated the beginning of the Rhythm and Blues dance movement, and his confidence grew as the performance progressed. There were a number of standout performers within the cast of Hairspray this evening, each interpreting their unique role for a powerful performance. Brenda Edwards sung the inspiring number ‘I Know Where I’ve Been’ with true passion and commitment, whilst Tracey Penn was hilarious in her multiple supporting roles, bringing raucous comedy to each scene in which she performed.

The creative team also played a crucial part in transporting the audience back to 1962 America. I particularly enjoyed the clever design of the iconic costumes by Takis; these aided the quick changes and transformations to keep the pace of the musical upbeat and engaging. This is the second national tour of Hairspray in 2 years, which confirms the show’s popularity and success. I think the musical’s triumph is due to the powerful themes imbedded in the narrative, and encouraging message it communicates to us today; not to let anyone stand in your way, believe in yourself and everyone else will follow.