Two push-bikes, one tandem, a couple of chairs and a table was all the stage setting needed when John Godber’s The Scary Bikers came to Hull Truck Theatre on Tuesday night.

Not forgetting a hidden piano player (or was it a tape?).

Okay, the setting wasn’t that bare, but I swear, without any props, we in the packed audience would have still loved every minute – so entertaining were the shenanigans on stage.

John Godber as widower, Don, and Jane Thornton as widow, Carol, are just two ordinary people meeting up, chatting and finding a common interest – in their case, cycling. As soon as they opened their mouths, I felt at home! Their northern accents felt so soothing and familiar.

Although a comedy, it is sadness that brings the two together – Carol’s over her late husband and Don’s over his late wife.

Ex-miner, Don, rails against the establishment any chance he gets, admitting he “hates everyone”. Carol is financially more secure than Don, and views world events differently. They first meet at the cemetery when a weeping Carol, visiting her husband’s grave, is approached by a concerned Don, there with flowers for his late wife’s grave. 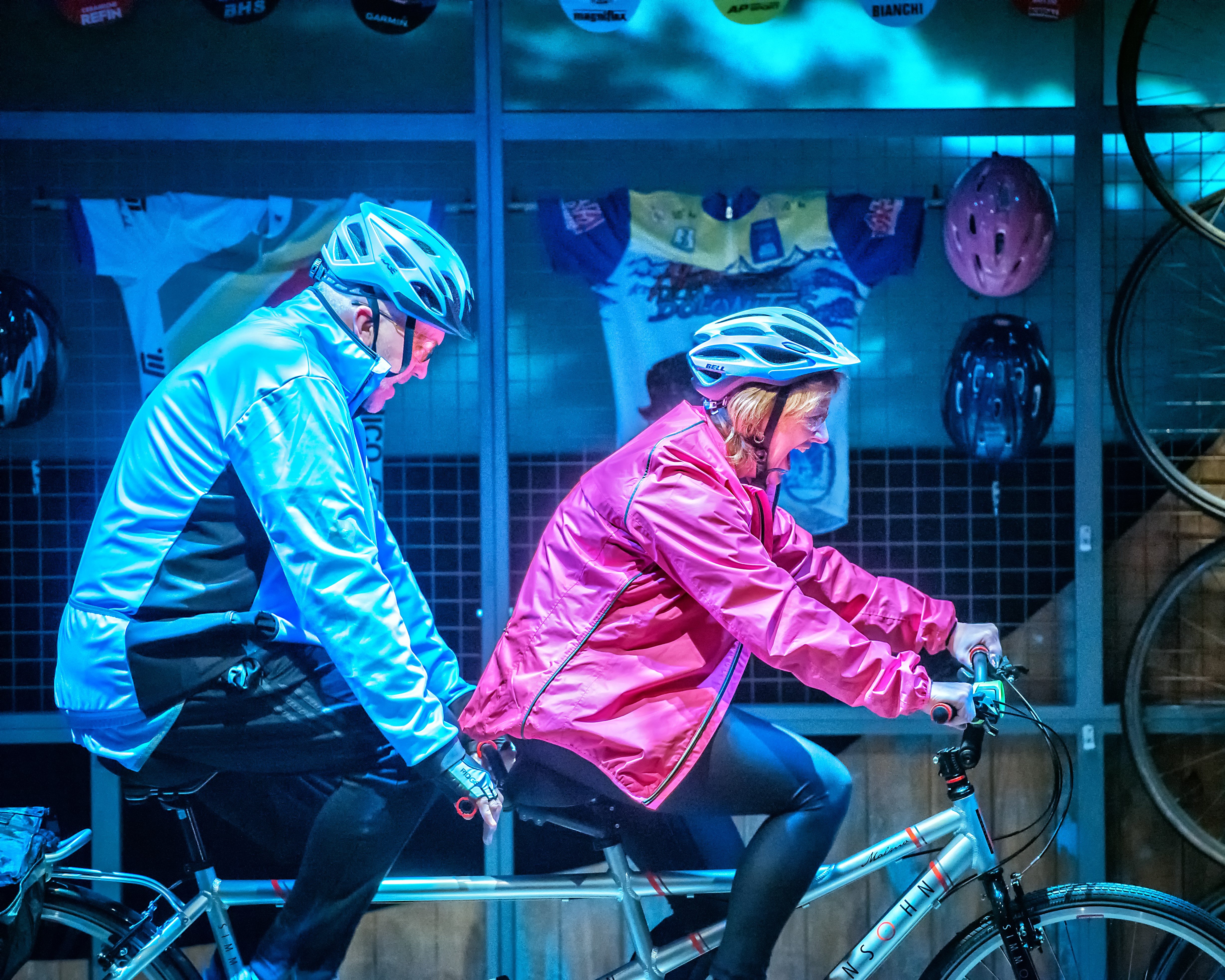 Skip forward 18 months, and Don, now a porter at a local NHS hospital, bumps into Carol, whose son has been admitted with a suspected broken leg. Carol, who has opened a bike café in memory of her late husband, a keen cyclist, invites Don for a coffee if ever he’s cycling by. To her surprise, he does cycle by – a round trip of 100 sore miles – and, again to her surprise, she invites him on a cycling holiday she is contemplating – to Florence, Italy. In typical Don fashion, he grumbles about the price, but eventually agrees. In typical Carol fashion, she tries to make it cheaper for him, by buying a tandem to share.

On the day of departure, June 23, 2016, the sight of the two pedalling the 70 miles to Hull’s ferry terminal, was hysterical. They aren’t youngsters, but I swear their legs were a synchronised blur. While zooming along, Carol’s question was innocent enough. “How did you vote?” she asked Don (it being the EU referendum day). “Out,” came the reply. And that’s when the fun really started – Brexit being a topic running through the rest of the proceedings like letters in a stick of Bridlington rock.

Carol’s concerns begin when she wakes up in Europe on June 24 to the realisation the UK had voted to leave the European Union. But, after a laugh-a-minute scene - involving getting lost and a stolen tent – she finally gets to relax in a hotel just outside of Pisa. However, her concerns are heightened further, when, after a Brexit rant by Don, her chest tightens and she feels tingling down her left arm.

Cue another hilarious scene, with Don carting remainer Carol off on the tandem, to a hospital in Pisa, where she is diagnosed with having a panic attack. Months later, the couple, both now working in Carol’s café, look back on the trip. They have settled into a comfortable relationship, but the elephant in the room is always Brexit.

Godber’s portrayal of a big bear of a gritty northerner was the perfect foil for Jane Thornton’s calmer, gentler persona. But both equally took command of the stage from get go.

Making us laugh out loud one minute, then hushing us into a concerned silence, another, the script, realistically delivered, definitely kept us on our toes. And never once did I have to strain to hear what was being said on stage.

With such a divisive topic, The Scary Bikers could have bored the pants off us. But Godber’s witty and amusing words, and some superb acting, meant we leavers and remainers in the audience all agreed on one thing – we’d had a blooming good time.