Unapologetically nostalgic and gregarious fun, the wistful big red London bus rolled into Leeds last night. 'Summer Holiday' based on the 1963 feel good film starring Cliff Richard and Una Stubbs was adapted for stage in 1996 by Michael Gyngell and Mark Haddigan with additional songs from Sir Cliff's back catalogue.

After an initial two year run with Darren Day at the wheel of the London Bus, it is now the talented Ray Quinn who drives the production as the wholesome lead character Don and his navigation is awe inspiring!

The tentative story is loosely... Don, makes a deal with a transport company to get his hands on a double decker bus for him and his transport mechanic friends – Steve (Billy Roberts), Edwin (Joe Goldie) and Cyril (Rory Maguire) to travel to Europe for their summer holidays. Adding the romantic interest, along the way, they meet three girls whose car has broken down in the middle of nowhere – Mimsie (Gabby Antrobus), Alma (Alice Baker) and Angie (Laura Marie Benson). 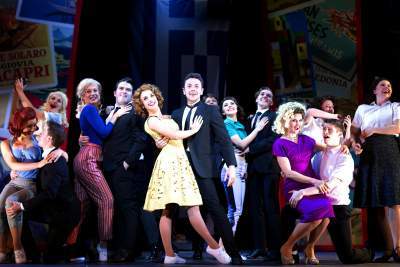 The girls need to get to Athens to perform a gig as the singing trio Doh-Ray-Me, so of course, the boys gallantly step in to help. Then add Barbara (Sophie Matthew) a young American singer who stows away on the bus dressed as a male, whilst trying to escape her controlling, pushy mother - Stella (Becky Bassett - understudy). Along for the ride is also Barbara's long-suffering agent Jerry (Bobby Crush) together they add the comedy duo to the show.

The stage is dominated, as expected by the Big Red London bus, which rotates around the stage for different vantage points. Several moving flats are used to mask the bus when scenes are set on location. The set is clever and not over bearing, allowing the cast to successfully fill and own the stage with vigour.

The scant storyline takes an unnoticed backseat to the energy, hard rate and expertise of the cast. I was very impressed, the almost parody of the carefree, glorious summers of yesteryear - a time of naive freedom is epitomised by the cast to perfection. The stunning direction and choreography (Racky Plews) is constant and unashamedly of the era. The effectiveness of the skiing number using only ski poles and 'heelies' was delightful! As was, the opening sequence depicting the British weather with just a deck chair and lighting design by Tim Deiling. Unapologetically simple, all in keeping with the nostalgia, genius.

The boyish charm of Ray Quinn was positively spellbinding, this young man's charisma, stage presence, and athleticism were supreme, he blew me away! He had the audience in raptures with his authentic vocals and dance ability - this man can really move and backflip! His buoyant performance is pure musical theatre - singer, dancer and actor, I was mesmerised, and I shall remember the image of him sing Bachelor Boy in his Y fronts for a long time - comedy gold!

Although the rest of the cast never quite matched the vocal ability of Quinn, it didn't seem to matter, it merely added to the authenticity. However, a special mention must go to Billy Roberts (understudy Don) and Rory Maguire for sterling performances and Sophie Matthews for her command of the comedy scenes within the role.

I surprisingly, really, REALLY loved this show, I left the theatre relaxed, smiling and feeling great! In fact, I enjoyed it so much I will be waiting in anticipation at the next bus stop to hop back on for another journey! My advice....Don't miss the bus, it is worth the fare!