An original play set in the Brutalist concrete housing of the Parkhill estate in Sheffield, may not sound the most attractive premise for adaptation into a musical. However, 'Standing At The Sky's Edge' was life affirming and heart-breaking in equal measure and easily my highlight of my theatrical year to date.

We are introduced to three families arriving at the same Parkhill flat on separate timelines. In 1960 we see Rose (Rachael Wooding) and Harry (Robert Lonsdale) arriving on the newly built estate, young, confident and brimming with optimism, they are the embodiment of sixties Britain. By 1989, when Grace (Deborah Tracey), her son George (Fela Lufadeju) and niece Joy (Faith Omole) arrive as refugees from the civil war in Liberia, Parkhill has descended into a 'sink' estate, rife with crime and drugs. The final vignette brings us to 2016 and the entrance of Poppy (Alex Young) from London, fleeing a broken heart and wanting to reinvent herself in a new city. This gentrifying renaissance is exemplified by Connie (Nicole Deon), the estate agent acting as chorus/narrator throughout the evening, her story weaved throughout and embodying the fortunes of the estate. 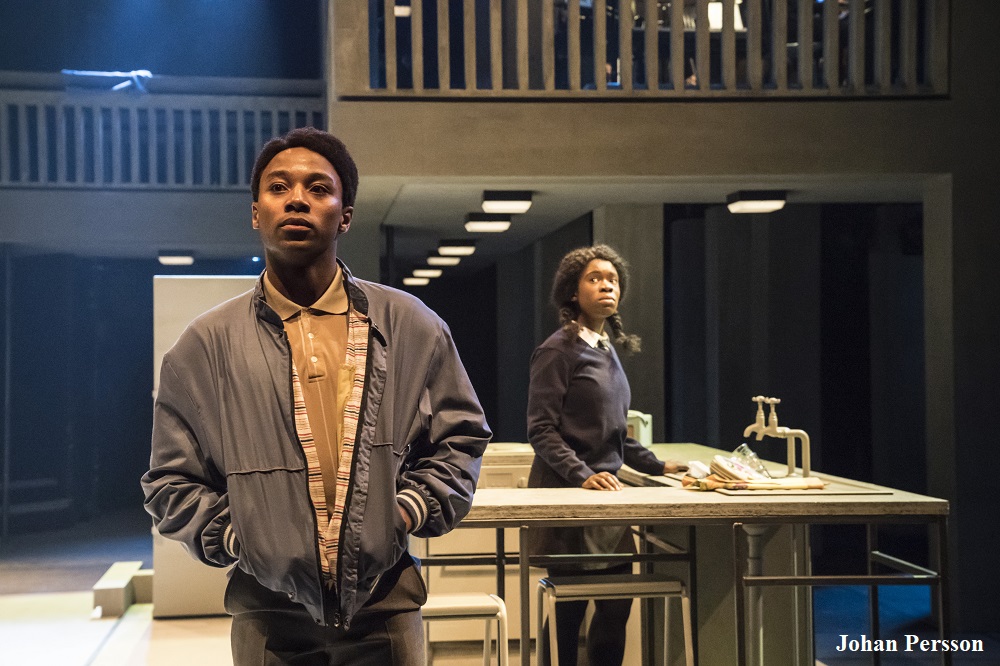 Director Robert Hastie expertly pulls these three narratives into a clear coherent whole. Despite the multiple timelines often occupying the stage space at the same time, there is never any confusion with the storylines. Indeed the experience is much more interesting than a simple linear structure, meaning the pace of the piece never lags and more dialogue is packed into the two hour run time.

The three contrasting tales not only represent the rise and fall (and rise again) of a great northern city in microcosm, but also allow the actors to display the characters as wholly three dimensional. Lonsdale as Harry, is able to chart the decline of his character from proud steelworker, through anger and depression to a lonely alcoholic end; Omole allows Joy to grow from innocent schoolgirl to proud mother and matriarch; and Young shows what a broken heart takes to mend to beautiful effect. However, every performance across the large company was focused and deliberate, with the riot that brought the first Act to a uproarious conclusion crackling with energy and realism. It perfectly encapsulated the frustration of a forgotten people and a city reaching breaking point, and was a reminder that the eighties wasn't all yuppies and filo faxes played out to a Spandau Ballet soundtrack, especially in the north.

Sheffield born writer Chris Bush has a fantastic ear for dialogue and the local dialect and earthy humour is displayed here with devastating effect. She skewers misconceptions about the North ('Do they have Ocado in Sheffield?') with as much spice as the local Henderson's relish, but there is real underlying craft in interlocking stories to form a complete narrative. The wider political context of the entire era is made accessible and understandable, the decline of steel and coal being juxtaposed against the rise of the service industries whilst the audience is never left in doubt about the sympathies of the writer she always steers away from polemic hectoring with humour and grace.

Bush originally conceived the idea to tell the story of her city's post-war history as a straight play and it probably could have been a success in that format, however it is the addition of the music and lyrics of Richard Hawley that lift the piece into a wholly different sphere. Hawley has combined his classic back catalogue with new songs written specifically for the production, and when blended by Bush into a song - speech style, his lyricism adds much to the story. The rendition of 'Open Up Your Door' by Maimuna Memon as Nikki is a particular highlight, but with the songs being divided evenly across the cast, almost every actor is given the opportunity to contribute musically.

The entire score is beautifully orchestrated throughout by Tom Deering and Will Stuart and delivered with panache by the seven piece band perched high in the on stage tower. Ben Stones design minimalist single set allows space for the company, which doubles in size when supplemented by actors from the Sheffield People's Theatre. With a skeleton of the flats and a suspended walkway the space was used to full effect, especially during the musical interludes.

Ultimately, the star of the show is Parkhill Estate itself, the 'little boxes to keep the rain out' giving us the backdrop of gritty elegance against which small lives and big themes are played out. With this heartfelt show, Bush and Hawley have delivered a stunning love letter to the steel city that has heart, humour and particular northern beauty.