Wheels within wheels, plays within plays. Who is really whom and what does it all mean? The answers to these questions lie in this stylish production of Edmond de Bergerac, a twist on the classic play Cyrano de Bergerac by Edmond Rostand first performed in 1897. Written by the French playwright Alexis Michalik (translated into English by Jeremy Sams) and directed by Roxana Silbert, the play is entertaining and technically impressive, though somewhat lacking in spontaneity and surprise.

The narrative centres on Edmond (Freddie Fox), a down-on-his-luck playwright who is fast becoming a financial burden to his wife and family. A series of unlikely meetings commit him to writing a new play for the established actor Constant (Henry Goodman), even though he doesn’t have much in the way of character or story up his sleeve. Inspiration comes in the form of his friend Leo (Robin Morrissey) who needs help wooing the seamstress Jeanne (Gina Bramhill) with some poetic love letters. 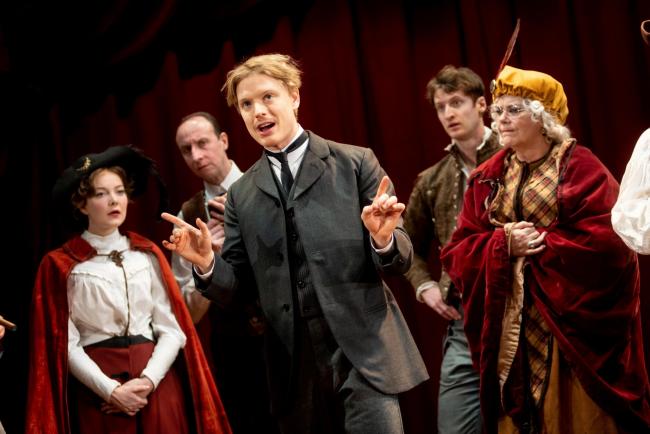 Edmond quickly becomes his friend’s romantic mouthpiece, entering a surrogate relationship with the woman who becomes his muse and the engine for his creativity. As the fictional production staggers towards its first performance, all manner of chaos is unleashed, including several visits to a bordello, a temperamental actress (Chizzy Akudolu) who may or may not play a leading role, Edmond’s increasingly suspicious wife (Sarah Ridgeway) and a last-minute pep talk by an idealistic barman (Delroy Atkinson).

There is much to like in this play. Though not a laugh-a-minute comedy, there are enough pratfalls, gags and farcical scenes to make it very amusing. The cast have great comic timing and use this to squeeze every drop of humour out of the script. Delroy Atkinson is a charismatic figure whenever he appears as Monsieur Honoré, and Nick Cavaliere and Simon Gregor are an excellent comic duo as the sleezy financiers. The most relaxed and well-rounded performance comes from Freddie Fox (Edmond); arguably because he is given the most time to do so, Fox assuredly carries the play forward. The production also makes good use of moveable set design, and the use of music throughout is superb and arguably powers the show.

The play wears its Gallic sensibilities on its sleeve, and some will find this charming. Others, however, may feel that the central love triangle of Edmond-Jeanne-Leo (expanded to a love square if we include Edmond’s wife Rosemonde) is more at home in a Carry On film. After a while, the whole thing starts to feel like a bawdier and more slapstick version of Shakespeare in Love.

Likewise, none of the main characters are particularly sympathetic (neither Edmond nor Jeanne are particularly likeable, expecting their respective partners to tolerate their emotional affair) and the dynamic between the characters does not resolve itself in a way that is entirely satisfying; rather it simply ends because the play demands that it does. This may be the result of a culture clash or something lost in translation.

Moreover, there was the impression of an ‘in-crowd’ atmosphere to the production, with several performers being under-utilised even though others were always in focus and played multiple roles throughout. The cast thus felt imbalanced, with some performers stealing the limelight and others stuck on the fringe, acting as little more than bodies required for (admittedly impressive and entertaining) physical set-pieces.

Overall, Edmond de Bergerac is a strange creature. There are moments of fun and moments of pathos, but its blend of comedy and drama doesn’t always work. All the ingredients of greatness are there, but it (perhaps the play or the production or both) lacks the potency it needs to elevate it into the stratosphere. As it stands, it’s an interesting and enjoyable experience, but not one that lingers in the memory.