We live in really uncertain times so it is fitting that Rufus Norris has delivered a suitably dark version of this classic musical confronting head on the politics of hate that swirl round Berlin's decadent Kit Kat Club.

As you might expect from the Artistic Director of the National Theatre the death throes of the free spirited Weimar Republic and the rise of the Nazis is handed with great intelligence and empathy, giving the well-handled savage denouement even more power.

It’s easy to forget that unlike the Oscar laden movie damaged nightclub chanteuse Sally Bowles isn’t the main character, but instead that falls to the Emcee of the Kit Kat Club played with savage glee by John Partridge in a variety of outrageous costumes. 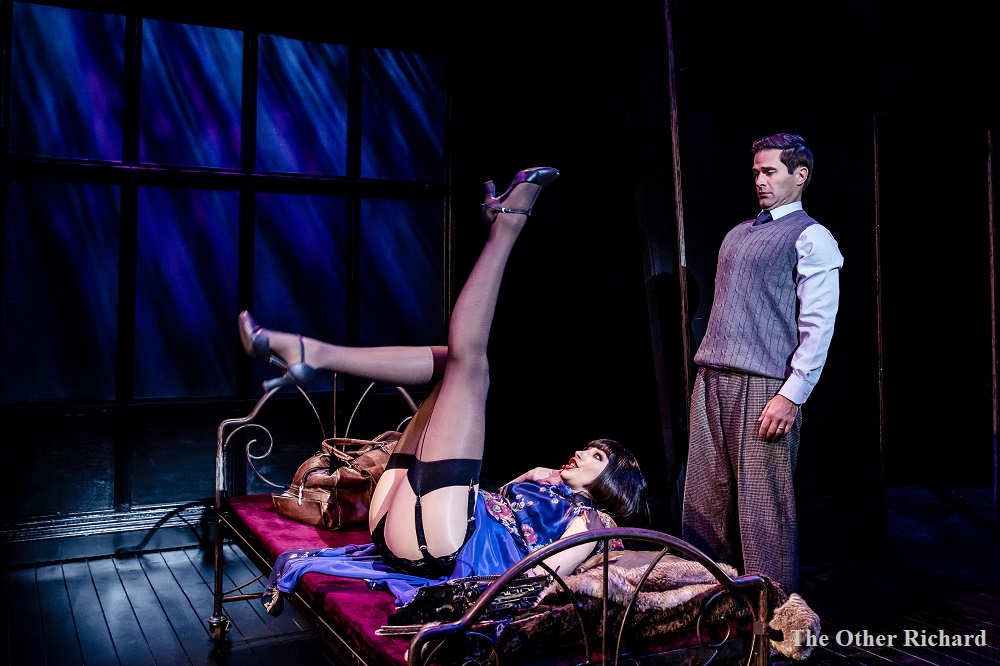 Partridge plays this vile creature with a secret as a malevolent clown sticking two fingers up to the horrors he knows are coming, and his powerful voice is suited to both big numbers like ‘The Money Song’, and the desolate ‘I Don’t Care Much’.

The less experienced Kara Lily Hayworth doesn’t quite find the path behind Sally’s brittle charisma and her delusional narcissism, but she does sing beautifully on a moving ‘Maybe This Time’ hoping against experience that her American beau Cliff might offer a way out, and a desperate ‘Cabaret’ as her world finally implodes.

Charles Hagerty makes a welcome return as the bisexual Yank acting as the show’s moral heart and his relationship with Nick Tizzard’s shady businessman Ernest Ludwig rings true. There is an audible mutter of disgust when Ludwig reveals the dark secret that taints idealistic Cliff who’s been drawn into his nefarious activities.

It was a delight to see the venerable Anita Harris as on her uppers landlady Fraulein Schneider who was in fine voice on a moving ‘What Would You Do?’ visibly wrestling with her conscience. Her faltering romance with James Paterson’s Jewish fruit merchant Herr Schultz is subtly drawn by two talented veterans.

The other unbilled star of this dark and often dank piece is the reimagined choreography by Javier De Frutos, which dispenses with Bob Fosse’s jazz hands for a more sensual style that fits perfectly with the decadence of the period. It helps when you have recruited a very strong ensemble capable of switching from the complicated moves round a staircase on ‘Mein Herr’ to the sheer daftness of ‘Two Women’ that somehow represents the naughty freedom on offer in a Berlin about to enter hell.

In an era when old school Fascism is sweeping across Europe, and the fear of the other infects our own nation, it takes real guts to turn a touring production into a rallying call to resist hatred wherever its rears its ugly head. As the Emcee wearily points out ‘all this hatred is exhausting’ which is a line that rings truer than it ever has.

Cabaret is at Leeds Grand Theatre until Saturday 7th March. To book www.leedsgrandtheatre.com or 0844 8482700.