The Farndale series of plays by David McGillivray in collaboration with Walter Zerlin Jnr (and with a little contribution from William Shakespeare) are a spoof of local amateur productions, with their take on Macbeth first staged at the Edinburgh Fringe in 1976. It is a brave move for any company to attempt a play within a play, especially when all the characters are excruciatingly bad, but as their season opener, The Carlton Players, under the direction of Marc Smith, throw themselves enthusiastically into this intentionally shambolic production of the Scottish play involving last minute changes of cast, a variety of accents, a collapsing set, witches in wheelchairs, flying props and much, much more.

A manic musical introduction by Gwyneth (Gareth Crawshaw) on keyboard heralds the appearance of Mrs Reece (Rachel Razbully), the all committee-type of woman (you know what I mean), to tell us we are about to see the Farndale Ladies entry in the annual drama festival with the hope of progressing to the national finals in Welwyn Garden City. She introduces us to the adjudicator, Mr George Peach (Steve Youster), who entertains with a number of magic tricks during the evening, whilst she mixes his name up with pretty much the entire contents imaginable in a fruit salad. 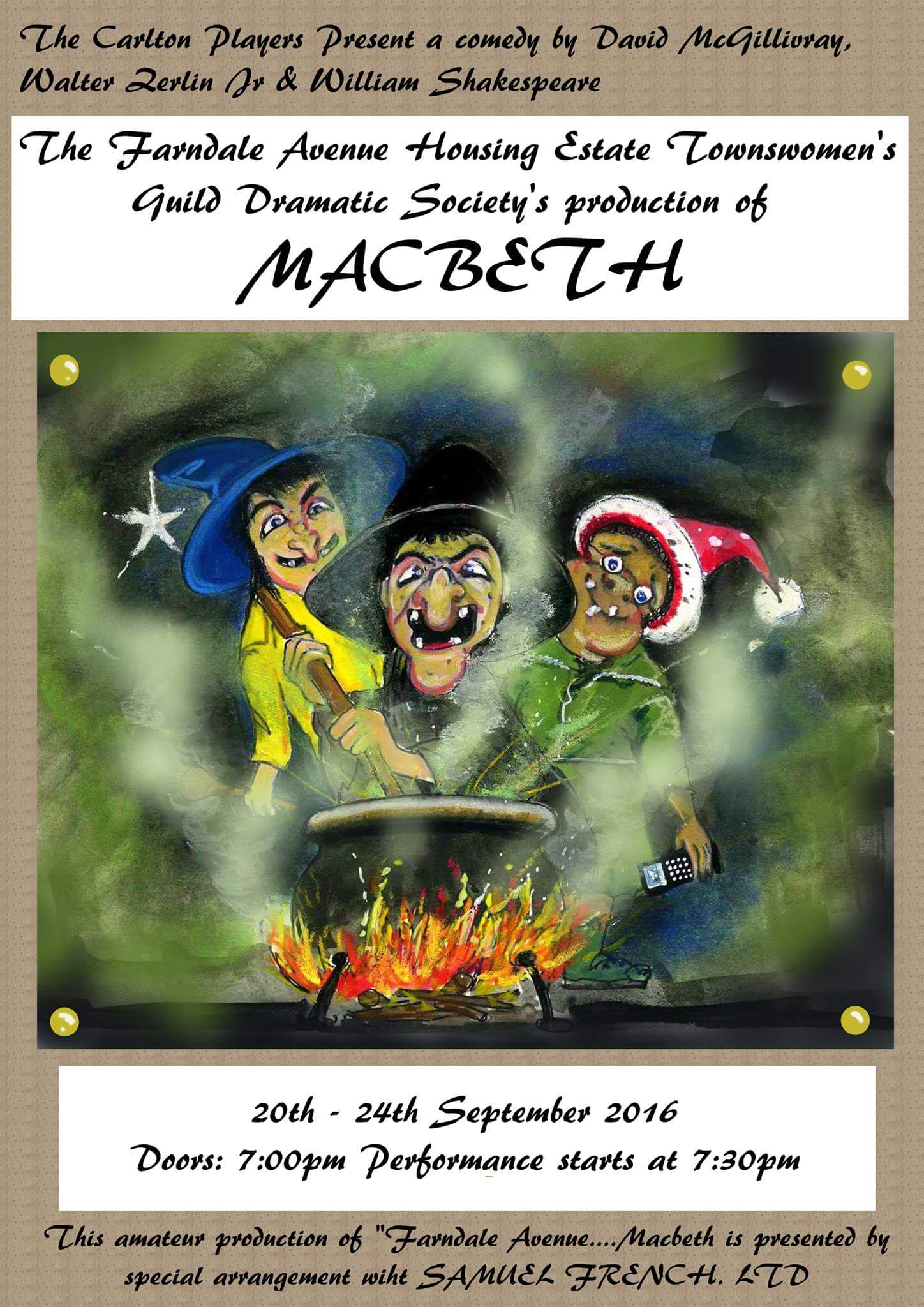 With Mr Plummer (Stephen Higgins) supervising from the wings, we begin as our three witches, superbly played by Dawn (Maureen McConnell), Felicity (Fiona Williams), and Kate (Rebecca Williams), appear on a back to front stage and soon to be joined by Thelma (Laura Cooper) as Macbeth and a rather hoarse Minnie (Paula Condliffe-Hughes) as Banquo. Whilst the lights are dimmed for a hasty re-staging, we discover that Lady Macbeth has got on the wrong bus and is lost so an immediate replacement is required - who else other than hirsute stage manager and general dogsbody Henry (Tony Condliffe).

And so with the cast now facing the right way we are off again with mishap after mishap including physical injury, missed cues and lines, rope attached daggers, a baby doll and a seagull, and a moon falling down at completely the wrong time, not that any of this is going to stop our intrepid ladies as the tragedy of the play unravels in every sense. Throw in a lot of upstaging and off-stage tantrums, and, if you know anything about theatre, you will recognise a lot of people. Never fear, us critics aren't spared either as the adjudicator lampoons.

After the interval, where Razbully's Reece and Youster's Peach took over the raffle, we are off again before - shock horror - the adjudicator announces there are only nine minutes remaining to perform what is left of the three-hour play. Sorry, make that eight and a half. Cue mayhem as Higgins' Mr Plummer and Williams' Felicity deliver an exquisitely speeded-up performance completed by Macbeth's rattling death scene to a falling curtain. But all is not over as our adjudicator, who had been applying mascara and lipstick at various points in the proceedings, appears in a dress, apparently later tonight there is a drag ball, with his parting comments of apparent praise for the production capturing the spirit of the performance perfectly.

So the biggest challenge for a play of this nature is how to act well acting badly and keep the audience engaged. Well, the cast and production team pulled it off perfectly, it was believable from the moment it started. They did not fall for the trick of delivering gags and to a man (or should I say woman) delivered great performances. There is always the risk of the joke becoming tired, particularly in the second half, but the interval treatment served to retain a mood that can be lost and the cast were clearly well up for it and enjoying themselves which made it all the more credible with the audience clearly drawn into the illusion as the regular laughing and clapping proved.

A couple of favourite scenes for me were Lady Macduff (Razbully), Macduff's son (Condliffe-Hughes), 1st Murderer (F Williams) and 2nd Murderer (McConnell); and the infamous 'spot' scene with the Doctor (Razbully), Gentlewoman (F Williams), Lady Macbeth (Condliffe) and Mr Plummer (Higgins) as prompt. Cooper's Macbeth and Condliffe-Hughes' Banquo played off and upstaged each other perfectly throughout and Youster was delightfully entertaining every time he appeared , even if I am now going to have to reconsider my critics attire, and I still can't work out what he did with the water in the cup! And I'm still smiling at the 'it's magic' musical interpretation of witches round the cauldron including R William's Kate in a dancing wheelchair to the accompaniment of Crawshaw's pianist Gwyneth. As always special mention must go to the support staff behind the stage with set construction (Pam Buckle), lighting (Brian Williamson), sound (Henry Floyd) and wardrobe (Liz Youster et al) going to make this production, with all its intended failures, such a success.

The Little Theatre in Birkenhead is a delightful venue complete with bar and seating almost 300 including full disabled access. Productions date from 1930 and there are some wonderful photographs of earlier members adorning the interior.

The Carlton Players are the resident company at The Little Theatre and produce 7 plays a year including a pantomime, comedies and serious plays.

The production of 'Farndale Avenue...Macbeth' runs through to Saturday 24th September with performances starting at 7.30pm. Tickets are available via http://www.wegottickets.com/carltonlittletheatre