Altrincham Garrick's latest offering is the hit play, The History Boys, by one of Britain's finest living playwrights, Alan Bennett. Although this is not Bennett at his best, and the play is really quite long, there is still the trademark biting humour, the battling with sexuality, and the feeling that the common man has more about him than those wielding the power.

This play too, like many of Bennett's, has many short scenes, often returning to the same scene over and over again, even continuing where that previous scene left off. The writing is a little abstract, but that's the beauty of Bennett; following the narrative.

Armed with this knowledge I was very surprised to find that the set was very impractical. (design Juliet Jones). The play is already really quite long, and so to lengthen this further and unnecessarily by overlong and needless scene changes dampened my enthusiasm and enjoyment. A composite set, or even a split composite set would have worked much better and allowed for an organic osmosis of scenes. I am no fan of watching cast members change scenery at the best of times, but especially when such a situation could easily have been avoided. 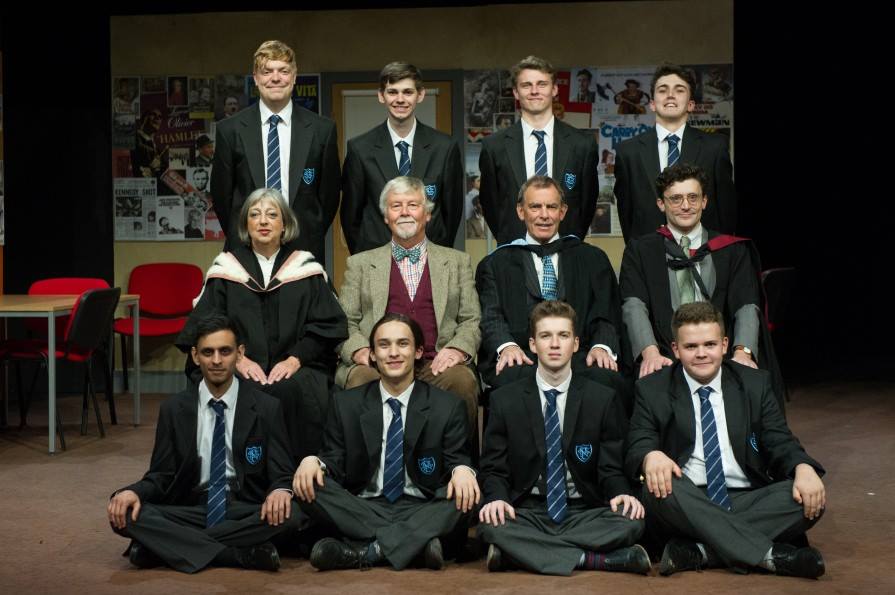 However, this simply doesn't diminish the superb quality of the acting. It is rather a large cast for a play too, and this play calls for a cast of 12, eight of which need to be school boys in their late teens; and there was not a weak link amongst them.

To give you a short overview of the story, just in case anyone doesn't already know the play; then it is the early 1980'a, and we are in a Boys' Grammar School in Sheffield. A special class has been set up to give extra lessons for those boys considered 'Oxbridge' material, and in order to prepare them for their university entrance exam, these classes aim to 'fill the gaps' which the standard education system has omitted. The class is taught first by a rather unconventional but passionate teacher on the cusp of retirement, and then by a young new recruit who sticks rigidly to a schedule and a method. One providing the buildings foundations whilst the other provides the stucco artwork if you like.

Although the play is ostensibly about the boys and their relationship with their teachers, and how they develop and grow and progress during after their studies; for me the play isn't about that at all. For me the play is a comment on social and sexual attitudes of the time, and I feel it is, although far from being autobiographical, still a very strong cri de coeur from the author, as he himself has faced hardship because of his sexuality.

Now back to the acting! Richard Sails I have seen a few times now at The Garrick, and never have I seen him more focused and at ease. He truly embodied the role of Hector, the kindly older teacher with a fondness for touching his pupils' balls. His passion for enlightening his pupils and his dejected resignation at being 'found out' were indeed very real, and his performance was both empathetic and excellently observed. Irwin, the new upstart teacher was played with no less passion by Anthony Morris. I have to admit to being indifferent about him at the beginning, but the more I watched him, the more I understood him, and the jigsaw fit together. A very intelligent performance. The other two adults in the play were upright and staid headmaster, Paul Reid, and a kindly and understanding would-be feminist Mrs. Lintott, Celia Bonner.

Of the 8 school boys, 'magnificently unprepared for the long littleness of life', there were a couple of stand-out performances from a sea of very worthy and creditable talent. David Beeby as Posner, a homosexual Jewish introvert, and a complete diversion from Beeby's usual comedy roles, was very well considered. Perhaps the most difficult of the boy roles, and certainly the most complex, and Beeby managed to find every nuance and play it for all its worth. Gabriel Walker played Dakin, the bright boy and cock of the school, whose sexual antics both heterosexual and otherwise were delivered with just the right amount of boyish pride and glee; and his cocky coquettishness towards Irwin creepily realistic. But the young actor who impressed me the most this evening was Peter Brassington as Rudge. His laissez-faire no nonsense attitude matching his oversized boy-turning-into-man frame and he was the only actor on stage to have nailed the Sheffield accent. {A couple of others came close, including Sails's Hector.} A very personable and real performance and very enjoyable.

The other boys deserve a mention too, as they were all extremely good. They were Karun Comar (Akthar); Charlie Gallagher (Crowther); Daniel Ellis (Lockwood); Jacob Taylor (Scripps), and Liam Dodd (Timms).

Directed by Nick Sample, this is an intelligent and thought-provoking play with much comedy thrown in with biting satirical lines [as indeed Bennett himself is an inhabiter of that 'wonderful world of words'] and swear-words a-plenty; it is such a pity that the play drags, and where the pace could easily have been lifted, it really never did. Coming down at just a little after 10:30pm I felt mentally drained; it was the stalwart and superb acting which sustained my interest.