Presented by the Centenary Theatre Company and directed by Joanna Milborne, it was a pure delight to watch this latest production of Guys and Dolls. Throughout, the standard of acting and singing was amazing. Whether a Guy or Doll or one of the main characters there was 100 percent effort put in from each and everyone. Professionalism all the way when a chair collapsed, which did make you wonder whether it was supposed to, but I was assured it wasn't in the plot!

A big plus was the excellent orchestra with musical director Michael J Scott at the helm as conductor. It is always good to have live music and not pre-recorded and this evening, the sound was just at the right level neither drowning out dialogue nor singing.

The show starts off with a busy Broadway scene set in New York during the 1930's. Amongst the hustle and bustle are three small time gamblers placing bets on the horses. Nicely-Nicely Johnson played by Dan Grimes, James Gibbons as Benny Southstreet, Jonny Stewart as Rusty Charlie each make their characters likeable and believable and give an amazing performance of 'Fugue for Tinhorns.' Sarah Brown (Jo Novoa-Bradley) of the Save A Soul Mission marches daily with her army in her quest to recruit those in need of saving to her empty mission hall. 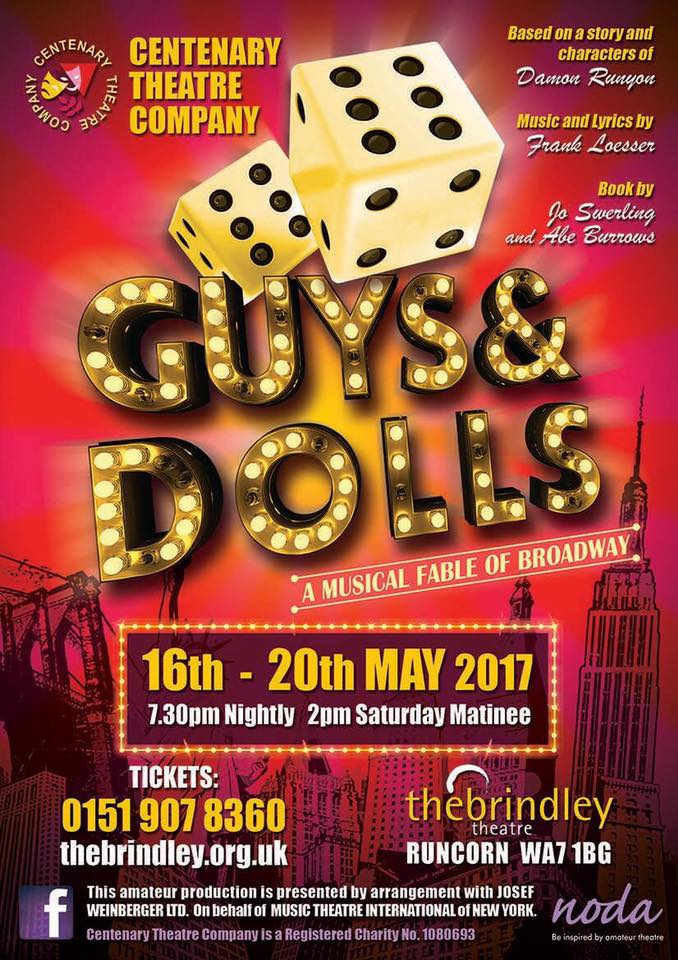 Nathan Detroit (Daniel Ritcher) is a local gangster who runs illegal crap games and boyfriend of Miss Adelaide (Kelly Herridge) star of the local Hot Box Club. The two bounce off each other in a perfect comedy pairing. Adelaide dreams of marrying her beau whilst he has bigger concerns desperately looking for a new venue for his next big crap game with Lieutenant Brannigan (Tom Evans) hot on his heels. Detroit needs a thousand dollars to secure his gambling den and meets up with notorious gambler Sky Masterson (Peter Brennan). Detroit bets Sky that he will be unable to take a 'Doll' of his choosing to Havana, for a meal. Unable to resist a challenge Sky accepts the bet to learn that Detroit has chosen missionary Sarah as that intended date. Undeterred he turns up at the mission for a meeting and learns that General B. Cartwright (Sara Warton) is threatening closure if numbers don't increase. Seizing the opportunity he promises Sarah a dozen genuine sinners at the next meeting if she accompanies him to Havana for a meal. Reluctantly she agrees to go, Sky is halfway there on winning his bet but actually finds himself falling in love with the unsuspecting Sarah.  There is a captivating rendition of 'I've Never Been In Love Before'. Another moving moment is the scene between Arvide Abernathy, (Mike Hall) Sarahs grandfather and singing 'More I cannot Wish You'.

As gamblers gather at the chosen venue with Big Julie (Alex Clare) hoping to change his luck with his own blank dice they arouse the attention of Lt Brannigan but Detroit manages to talk himself out of the situation insisting it's his bachelor party, which in turn convinces Miss Adelaide they are about to be married!  Consistently the vocals from all the performers were a pleasure to hear particularly Novoa-Bradley and Herridge and the clarity of their voices commended. Wardrobe and set design all deserve a mention which has made Guys and dolls this evening a must see production. All the classic songs are there including 'Luck Be A Lady' and 'Sit Down You're Rockin' The Boat'. I urge people to support this fabulous company and book now for the current run direct with the theatre. http://thebrindley.org.uk/to-book-tickets/