The Madness Of George III - The Garrick Playhouse, Altrincham

For Alan Bennett, this must surely have been a dream come true. Historian turned dramatist, and with a fondness for madness, how could this project possibly fail. Bennett's writing and observations are wonderful. He captures most superbly and with historical accuracy, the zeitgeist of the late 18th century, and infuses the whole with some sparkling dialogue.

The Garrick's production is stark and bare. Using only greys, blacks and whites, the set by Juliet Jones, was a simple two-width platform at the back with steps leading down to the stage proper with a white central panel continuing but broken up on the stage floor. It was a clear metaphor. The upright white plinth represents the stability of government and monarchy, whereas the floor is the shadow, and the shadow shows us the reality that both government and monarch are really not at all well. It was a very Brechtian set and appealed to me greatly. However, if I could make a couple of suggestions then I would have extended the rear platforms and had three levels, and I would also have made sure that the grey curtains used had been sewn or tacked together to make one. The gaps between them were a little annoying. The bed was excellent, as were the settee and upright chairs, all of which were also grey, black and white. The other props, although looking very authentic and period, were their true colours and so did just jar a little. I am wondering if there could have been any way of introducing perhaps some colour at the beginning of the play before his majesty's 'madness', and then bring that colour back in again at the end when he makes a recovery.

This idea could also have been mirrored in the costumes, which again were all grey, black and white. (With the exception of a little light blue and gold creeping in on some of the costumes!) The costumes by Mike Shaw, were nevertheless quite wonderful. Great attention to detail, and not just that to status and character trait too. They were extremely cleverly designed and looked wonderful. But again I am just wondering if a little colour at the beginning and end might not have been an interesting device.

With such a minimalist set, and such colourless costumes then the lighting needed to be absolute, which unfortunately it really wasn't. Having been to The Garrick a few times recently I know that your LX capacity is on par with if not greater than many small scale professional receiving houses, and so I would have liked to have seen some distinction between night and day; inside and outside, summer and winter. Alas, the only concession to this was Elizabeth walking on stage with candelabra, and the cast wearing more when it is outside on Christmas day. 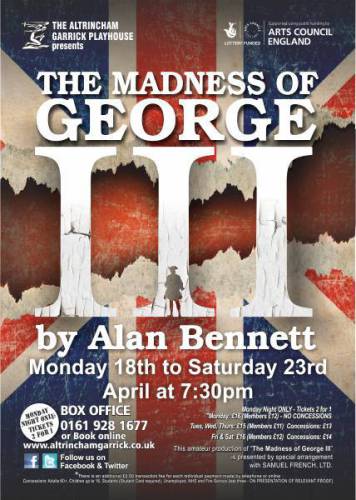 The play was extremely sensibly and solidly directed by Celia Bonner. Quite rightly allowing the comedy lines to speak for themselves and not to play them as comedy. This is a real and tragic story, and, comedy and tragic coexist in all situations, so play what is true. This is exactly what Bonner did, and allowed the story to be paramount. Some great character work had been done, and the distinction in etiquette and status nicely placed. This was first night, and so, perhaps the slight sluggishness of the dialogue at times, and lack of pace can be accounted for by that. The actors need to pick up a little more on their cues and perhaps be a little more animate too to contrast against the bleakness of set, situation and Pitt.

There was only one thing I didn't like about the directing, and this is nothing more than a personal whim. I didn't like the way the parliament scenes were done, simply standing facing the audience in a spot addressing the House. I cannot offer an alternative at this stage since I would need to give the matter more thought myself, but it just seemed too 'easy' or 'obvious'.

Oh, and I would have perhaps preferred to have seen the welt marks, especially on his temple. The make-up for his legs was excellent, and so we should perhaps have also have had something to show for this too.

And now to the acting; which I have to say, was, in the main, of a very high standard. Nick Sample played King George with great aplomb. A truly masterly performance and his 'madness' was never funny or over-the-top. It was a truly empathetic and sympathetic interpretation. I loved it.

It was a large cast. 21 actors and actresses playing 24 roles. I am not going to mention all of them; and as I have said, the acting was, by and large, very good indeed. But I will make a couple of special mentions...

First to Peter Brassington, who played the King's dauphin, George, Prince Of Wales. On his first entrance and speech I have to admit to not liking him at all. I feared he had simply taken as his starting point Hugh Laurie's interpretation of Prince George in Blackadder. However, I warmed to him as the play went on, and saw that his character was in fact much more grounded, and more relatable.

William Pitt's dark costume helped him to be the unsmiling and unswerving politician that he was. Played here by Steven Finney, there was no hint of comedy at all in this portrayal, and was real and truthful throughout. A very convincing and 'honest' performance.

As Pitt and politics take a back seat for a while, enter another dark and broody character. This time though a very authoritative one. Unswerving and demanding, he knows what his job is and he knows how to do it. A former man of the cloth turned physician, Dr Willis, played here by Martin Oldfield. His slight stature worked absolutely for him here. King George being quite a large man, even when a broken, grovelling wretch, to be controlled by such a small and wiry man was visually wonderful.

"I am the King of England."

"No sir, you are the patient."

Other roles to impress me were Bryan Higgins as Sir Lucas Pepys, Steve Williamson as Lord Thurlow, Sarah Broughton as Queen Charlotte, and Anthony Morris as Fitzroy.

All the wigs (Tricia Shaw) used in this production looked excellent except one, that worn by Sheridan, who looked like a punk rocker in his. I am certain there must have been some reasoning behind this choice, but it was not made clear to the audience, and it looked out of place.

Starting with Handel, ending with Handel, and using his music throughout was lovely. The choice of piece mirroring exactly the mood. Very well thought through, and worked well.

This is a very stark and truthful adaptation of Bennett's masterful writing, and as such, do not go expecting spectacle and grandiose sets. It has been stripped bare and even in the warmth and luxury of your theatre seat will still manage hopefully to make you feel uncomfortable at times. And yes, you will laugh too, but the laughs are not out-loud-belly laughs, [except perhaps Piss the Elder / Piss the Younger], but you will be both entertained and moved by this really rather good production.