...as the national tour of Last Night a DJ Saved My Life pumped up the volume at Wolverhampton Grand Theatre.

When I heard that David "the Hoff" Hasselhoff was doing a jukebox musical featuring the 80s/90s club classics I grew up listening to and with a scene that sees him donning his Baywatch lifeguard costume once more; I was expecting it to be cheesier than a four cheese pizza with extra cheese and grated cheese on top - and it didn't disappoint.

Everyone at the theatre was there to party with the Hoff and see the legend onstage; further encouraged by the cast telling them to take as many photos as they want, including selfies (as long as there's no flash) and post statuses on social media. I sighed when I heard that announcement; after all I'm a regular theatregoer and know that mobile phones can be a major distraction during a performance but the audience seemed to use restraint (reverse psychology perhaps?). 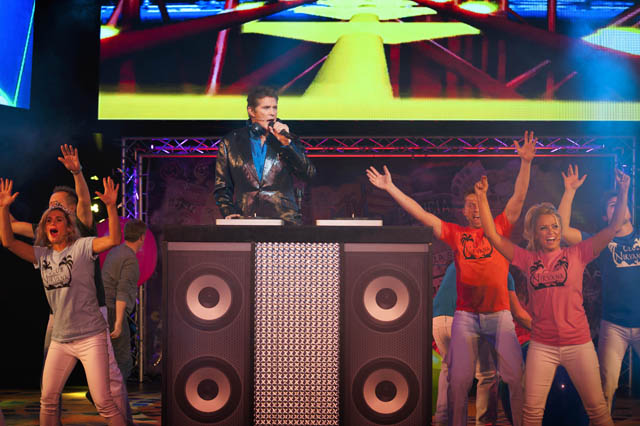 Last Night... tells the story of Ross (Hasselhoff), an Ibiza nightclub owner who is reunited with his daughter Penny whom he hasn't seen for three years. Penny, played by Stephanie Webber - a fine performer) battles teenage girl temptations of boys, drugs and wanting to party; the storyline about drugs in nightclubs allowing the show to become more than just a tongue-in-cheek celebration of Hasselhoff's career and have some poignant moments. In fact, drug dealer Ebenezer - played by Barry Bloxham - gives the most conventional musical theatre-style performance of the night and his maniacal rendition of Ebenezer Good was one of the evening's highlights.

Playing the boy that catches Penny's eye (Rik) was Shane Richie Jnr who seemed to be struggling well with the sound problems that were extremely noticeable throughout act one (regular noise like a crisp packet being pulled taut) and meant the curtain came up 5 to 10 minutes late. However, he seemed to lack the charisma that a leading character should have but came into his own when he was rapping with flair and passion, suggesting potential for a career down the R'n'B route.

The Hoff himself was fighting against his knee injury (no dancing, sorry ladies) but nevertheless seemed to be working none-stop even when not on stage, meeting fans and doing press interviews etc... So, considering what a jam-packed day he had, it was great to see him in fine spirits and egging the audience to get into the groove. He had one of the best stage presences - no surprise considering he has performed onstage so many times - but his singing (although fine in act one) was very strained and shouty in act two - particularly the last note of the Baywatch theme song, which caused giggles aplenty throughout the dress circle and made you wonder why it was ever left for him to sing. Nevertheless, the audience seemed to love him and he left us riding into the k-night with a smile on our faces.