Settling down to watch my evening’s performance of ‘An Inspector Calls’ I am not embarrassed to admit I was initially unsure whether a mid-20th century classic detective drama would keep me engaged during its one hour and 45-minute single act performance. However, it soon became clear that the seemingly traditional detective story was a subtle cover for quite a controversial and still current social message from J.B. Priestley. The entire play takes place during an extravagant engagement party within the home of the upper-middle class Birling family, until a suspicious Inspector Goole arrives to try and unravel the mystery around the death of a young girl that very same day.

The play was originally performed in 1945 with a clear social agenda, but it is Stephen Daldry’s 1992 revival of the classic which has seen the real success of this political piece. The moment the curtains opened and the dreary, pre-first world war set was revealed the audience was immediately transported to the bleak streets that surrounded the lavish Birling Family home. I feel the designer (Ian MacNeil) and his technical team deserve the initial praise as they succeeded in communicating the feeling of despair and resentment of the lower classes with the dull, grey backdrop and use of rain bars during the opening sequence. The symbolism and subtleties of the set continued throughout the performance with occasional overly dramatic elements (such as falling houses) designed to leave an impact on the audience, of which it did. 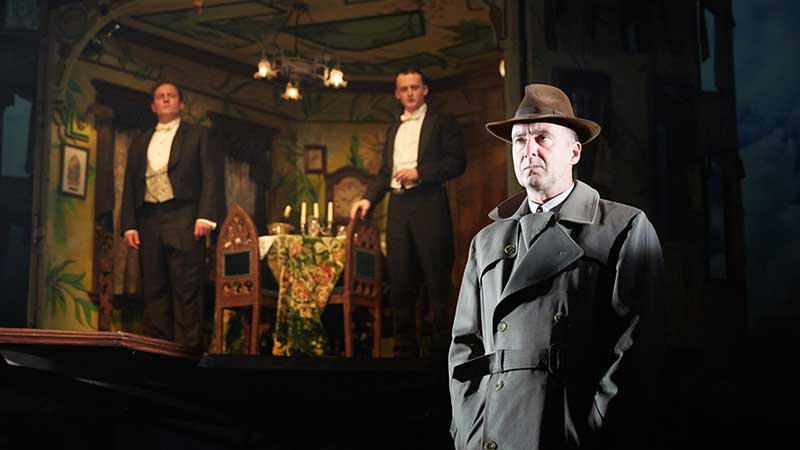 Inspector Goole played by Liam Brennan appeared to be very intense and melodramatic in his investigations which initially distanced me as an audience member from him. However, as the plot developed and the social agenda became clear, Brennan’s sharp and witty portrayal of the role with perfectly timed pauses and exasperation helped communicate the frequent arrogance and denial of consequences from the upper class. Eric Birling played by Hamish Riddle was for me, the most intriguing and more relatable character on stage. From his scattered gestures, and desperate tone in the initial scene you could feel his longing to be accepted by his father and the hopeless element of his character hooked the audience straight away. It was in fact the contrasting side of the character shown in the final scenes that really highlighted Riddle’s ability as an actor. This was of course benefitted by his fantastic comedy writing but Riddle managed to grasp the ‘lost’ emotion of the role perfectly during the breakdown of his family relationships.

Stephen Daldry’s direction managed involve the audience in this investigation, inviting them to make their own judgements on this broken family. From Katherine Jack’s portrayal of the ‘bolshie’ transformation for Sheila to Geoff Leesley’s display of loss of pride within Arthur, each actor managed to change all initial expectations of these roles. I know my initial expectations of the play were completely altered; the slightly intense melodramatic moments were complimented perfectly in harmony by the subtler, thought provoking social themes unravelled on stage.