Why don’t they just leave?

A question that is on the lips of many people who have not experienced being in a domestic violence situation. Ann Brown has been in that situation and wants to share her story in a bid to try to help other people to recognize the signs; to give hope that there can be a way out; life does go on and will be better. You are worth it!

During the hour-long performance, we accompanied Ann on her emotional journey as she shared her experiences.   It all began in July 1996, when she took her family on a holiday to Haven in Cornwall. She was accompanied by her two children and her parents and after a difficult divorce, she was ready for a break. She met Danny at the holiday park as he was working behind the bar. She was instantly attracted to him, and they appeared to have lots of things in common. They spent some time together and a few months later they moved in together. It was some time later when the abuse started, and his outwardly charming persona started to slip. Even so, she was pleased when he proposed marriage to her, and she said yes. 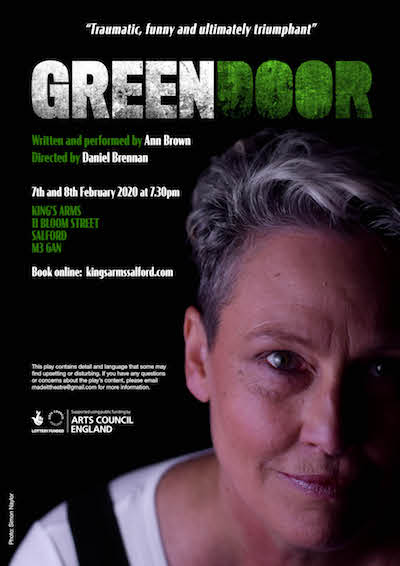 Her feelings of never being able to please him and always making her believe it was her fault, added to her feelings of inadequacy. With two children to consider, she didn’t want to break up the family and she now had a baby with Danny.

Finally, Ann decided she had taken enough and ended the relationship. It took 18 years of her convincing herself that things would get better to finally say enough is enough.

After bravely making this decision, she has never looked back.

Ann is a naturally warm person which comes through in her performance.

In doing this show, there is an element of self-healing going on, and tackling her fear of performing to an audience has obviously helped her to become a stronger person.

I have never seen this show with an audience, but it is a heartfelt, emotional and brave account.

Directed by Daniel Brennan and performed by Ann Brown, this is a disturbing but necessary monologue - a glance behind closed doors. Artistically, the staging is kept simple with Ann using a couple of chairs and a disco ball for props. She uses the space well and reminds us that she could be any one of us, thrust into a situation not of our own making. The dimming of the lights at the point of describing the physical abuse made it feel as though she was somehow experiencing it alone, and we now begin to feel how lonely and devastated she must have felt.

Action creates change! Ann wishes someone had been there is 1996 to tell her this wasn’t normal.

1 in 3 women will suffer abuse in their lifetime

These are startling figures, but there are people there to help and communicating this, is the reason for Ann putting this show together.

This live streaming has been organised to raise money for two charities, EdShift and The Emily Davison Centre. Please watch the play, and if you can afford it, please donate to these charities. You can watch the show and donate by clicking HERE.