Peter Pan Live! - The Shows Must Go On

This continues the offerings from the “The Shows Must Go On” YouTube channel that has been showing productions throughout lockdown. Peter Pan live! is a cross between a stage and a TV production, with multiple viewing angles and large detailed scenes following on from each other but without special effects being used for the flying scenes and other TV values.

Peter Pan Live! was originally shown as a live production special in America on NBC in December 2014, it followed the production of the Sound of Music the year before. The musical was first performed on Broadway in 1954, although some of the songs in this production have been taken from other revivals of the show and new songs adapted from other musicals. 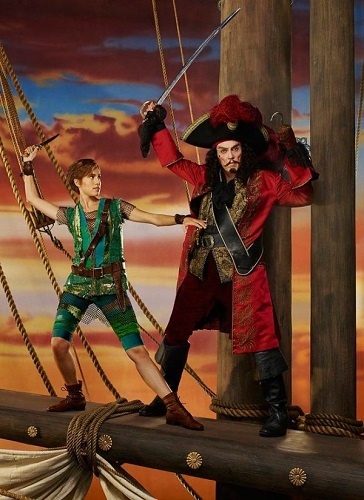 Peter Pan is a well-loved story of a magical boy who never grows up. He comes back to the Darlings nursery to collect his shadow and agrees to show Wendy, Michael and John his home in Neverland. There we meet Captain Hook and his pirate gang who have a long term vendetta against Pan and his Lost Boys. Plans are made to capture Peter Pan and his friendly rival Tiger Lily. In a twist to the usual story there is a scene at the end after the Darlings return to London. Back in the nursery we see the adult Wendy (Minnie Driver, who also narrates the tale) waiting, as she promised, for Peter to take her back to Neverland.

The cast is made up of American stars, Allison Williams stars as Peter Pan in a traditional principal boy gender swap. She captures the youthful naivety and energy of the mystical boy. In contrast, Wendy (Taylor Louderman) takes on the responsibility of a mother for the Lost Boys and Pan, desperately trying to teach them while still wanting to be a child herself. Captain Hook is played by Christopher Walken, an interesting portrayal. Walken’s Hook was more of a calculating and quietly menacing character rather than a strong and downright evil character. He almost seemed nervous of Pan.

Hook and the pirates had some of the best musical numbers, a tap routine on the Jolly Roger and a tango among others. Certainly, a different set of numbers than you would expect from a pirate gang. Walken doesn’t shine in these numbers. The lost boys and Tiger Lilly’s gang had some energetic routines too. Most of the songs were obviously from the golden era of musicals, a time when tunes had a gentle feel.

The sets were large, a huge bedroom at the Darlings house and a full Hallway, a big proportion of the Jolly Roger, the Lost Boys underground den and various parts of Neverland. Neverland was especially colourful and almost cartoonlike with pink trees and the ground almost being a map of the island.

This production may not set the theatrical world alight, but for a couple of hours of light family entertainment it isn’t a bad choice.