You’ll see writer producer and solo performer Sadie Clark shine in this poignant comedy that tracks one woman’s transition from the comparison anxiety of her twenties into self accepting thirties.

The twenty something in question is Brooke, an angst ridden bisexual romantic vainly trying to live up to the expectations of those around her - including her girlfriend, her boss and her mother. Her story begins with the horrifying revelation that ‘private’ images from her google account have been shared with her mother - and the colleagues from her job as an algorithm programmer for internet dating site ‘Match Right’.

With Clark portraying every character via transitions of accent and mannerism, we see Brooke break up with girlfriend Amira and - with the big 3-0 and accompanying party looming - she decides to utilise her own algorithms to find new love given the weight of peer and maternal expectation: “Oh Brooke - single again?!” 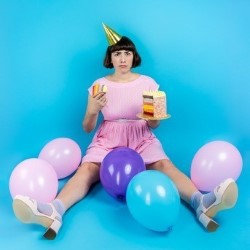 Although Clark’s accents wander off point at times, her performance is pitched perfectly in being exaggerated enough to captivate while retaining an authentic charm. The writing stays fresh and relevant throughout, self consciously acknowledging the clichés of the singleton rom-com genre while adding a contemporary twist by punctuating the piece with the paranoia triggers of the social media age - text response times; Whats App double tick notices; emoji and punctuation politics etc - each drawing knowing laughter from the audience.

As Brook enters the murky world of algorithmic romance we are treated to a mirth filled merry-go-round of mis-matches - from misrepresented dullards to drug fuelled warehouse ravers. The conclusion drawn is that mathematically predicting attraction is futile and that in romantic - and other forms of love -we’re often seeking affection everywhere other than where it truly lies: “There is no algorithm for love.”

The performance is held in the Baby Grand - a collection of pre-fab buildings in Pleasance Courtyard - which works perfectly despite its improvised nature thanks to careful attention to the technical details of seating, lighting and sound. The performance contains graphic sexual and drug use references and although this never feels gratuitous, some potential audience members may wish to consider if this will be appropriate for them or members of their party.

A key touch point through the work is Brooke’s relationship with her mother - which is a vehicle for many of the core themes, including body shaming, comparison anxiety and inter-generational expectation. Although this is often played for uncomfortable laughs, the depiction develops into a more generous, mature and emotionally nuanced examination of a mother-daughter dynamic.

If you are interested in a funny poignant and charming examination of relationships in the 21st century, then you should definitely swipe right for Algorithms. It’s a perfect reminder of how art can provide a valuable vantage point from which to examine the peculiarities of contemporary culture. Until 26th August https://tickets.edfringe.com/whats-on/algorithms