Tonight, the Theatre Royal St Helen’s show case ‘Strong Enough’ which is described as the ultimate tribute concert to Cher. Knowing a few of Cher’s songs but not being a diehard fan, I went to tonight’s performance with an open mind and in hindsight, I think it’s true to say that you have to be a big Cher fan to fully enjoy!

The promo invites the audience to ‘Turn back time’ and celebrate the Queen of pop and rock, Cher. The show is a celebration of this iconic figure whose career spans across 6 decades. Cher rose to stardom as part of a singing act with husband Sonny Bono in the 1960s, hitting No. 1 with the single "I Got You Babe" before they starred together on The Sonny and Cher Comedy Hour. Now at the age of 73, she is still making her own music and doing sell out tours in huge arenas across the world. It is no surprise that her hugely successful career has led to tribute shows like ‘Strong Enough’ being popular with eager fans who are keen to hear her classic hits performed live on stage.

As the curtains open, the performer appeared a little nervous however as time progressed everyone relaxed and by the interval, the audience were on their feet, clapping and singing along to their favourite numbers. Some of the songs were new to me although I thoroughly enjoyed hearing them with “love and understanding” and “I found someone” being personal favourites. 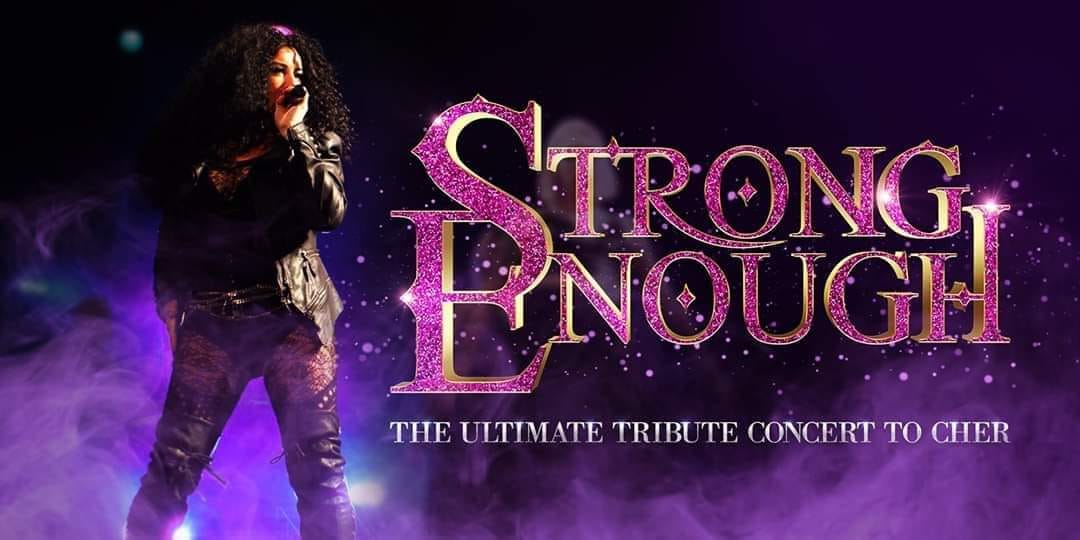 One individual performer was our ‘Cher’ for the night, and she managed to achieve the remarkable deep tones of Cher as she belted out hit after hit. However, it must be noted that her mic was not crystal clear which did affect the sound quality on some occasions. The same cannot be said for the band who sounded fantastic throughout as they superbly supported the well-known classics such as “Gypsies Tramps and Thieves” and “If I could Turn Back Time”. Four males on drums, keys, guitar and bass performed live and accompanied every song with passion and style. A special mention must go to the guitarist for his wonderful vocals and impressive solo numbers.

One of my favourites was “Bang Bang” as it brought much needed drama and diverse lighting to create a totally different atmosphere. For the majority of the show, it looked as though the projector was on at the back to create some visual depth to the performance however this could not be seen during the songs and was only watched during the interludes when the performers left the stage to change costumes.

Overall, the show was diverse as it mixed the slow sensual numbers with the likes of ‘Abba’ and of course the wonderful “Shoop Shoop song”. The costumes were simple but effective and the two dancers enhanced the performance immensely, if anything I think more dancers would make this visually more appealing to the mass audience. By the end of the show, the audience were on their feet, dancing the night away and singing the lyrics at the top of their lungs which created a wonderful atmosphere. The end of the show is filled with upbeat favourites which make it difficult not to get involved and have a good time.

With a cost of £26 per ticket, I personally feel this show is a little pricey however most of the big Cher fans who were on their feet dancing in the aisles and singing their hearts out may argue it was worth every penny. Ultimately, if you like her enough to pay for a ticket then you are going to have a brilliant time!