Make no mistake, this is most bizarre, so much so, that comes an announcement early on requesting the audience to leave the building, no mad rush for the exit because everybody assumed it was to do with the play. As if that didn't provide more than enough drama for one night....

Let's begin at the beginning, where you get the full benefit straightaway with loud, clanging music, atmospheric lighting and an incredible, teetering set (which I first saw years and years ago), maybe even more iconic than the play itself: sinister as The Hut on Hen's Legs; claustrophobic as a Doll's House. And so it begins in the Birling family home, the door firmly shut on them in all their finery of impeccable dinner suits and fancy frocks, tucked up warm and safe inside, insulated and isolated from the outside world, 'holding darkness within'. All those skeletons lying in wait in their closet; all those family secrets. But such a confinement, when they can barely be seen or heard, makes it virtually impossible for us to work out just what the hell is going on. Just like them. 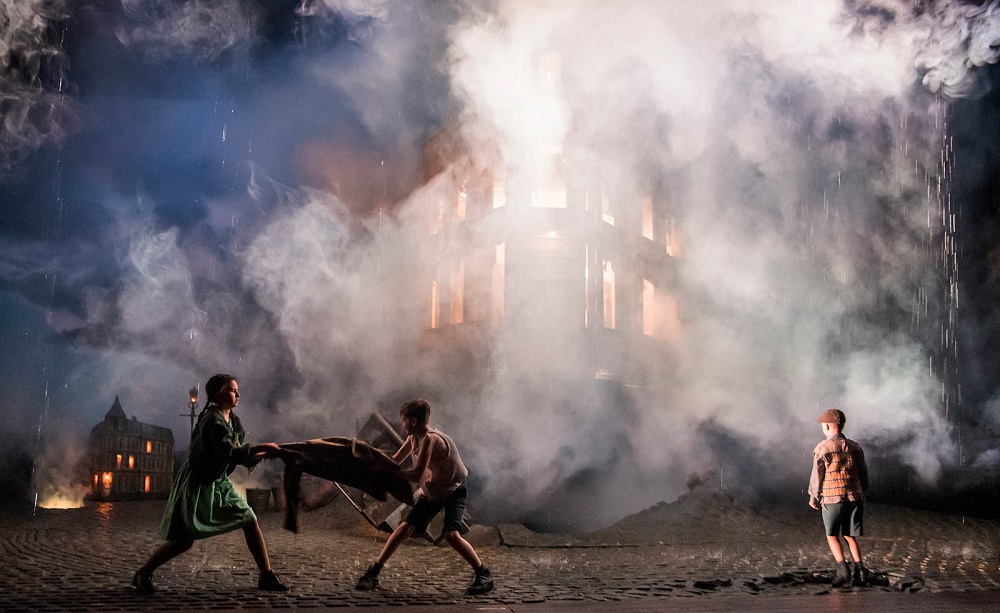 Things, and the family, slowly start to open up with the arrival of the eponymous gentleman, and the interior is revealed as a cluttered dining room. It's still as distracting because schadenfreude plays havoc with concentration. Awaiting the Birling downfall, you cannot help wondering when one of the family really is going to trip up, especially on that shaky balcony. There's also a wobbly lamp post and although the background wonderfully evokes the rest of the street, all sense of perspective is lost whenever anybody ventures close to the nearest mansion. As for the what you may call climactic moment, it's more of a damp squib than the Fall of the House of Usher.

But the play's the thing, with its split level acting and multi layered plot, thoroughly gripping as Inspector Goole ('Ghoul' my companion suggests) scolds and cajoles the truth out of father, mother, son, daughter and her fiancé, the way every one of them has a responsibility for the tragic death of Eva Smith. At times, his denunciations are made in front of the community, huddled together on what looks like a bombsite; silent witnesses and accusers, including the housekeeper/tricoteuse. (mutely, skilfully played by Emma Cater)

Yes, heads will roll, most certainly, thanks to Liam Brennan - thanks indeed, et chapeau bas, for an impeccable performance as the Inspector, one of the best I have seen in anything, in decades; completely convincing. Unfortunately, by contrast, the other three men are stuck in blustering Victorian melodrama mode: Jeffrey Harmer, the overbearing, greedy patriarch; Ryan Saunders, lily-livered heir, Eric; Alasdair Buchan, the conniving, charmless suitor. Christine Kavanagh however is splendid as the uncharitable, hidebound matriarch, stiff as her corsets, while Chloe Orrock, daughter and fiancée, being the only basically decent one among them, is beguiling as she slowly comes to understand, and regret, the error of her ways, facing the audience as if before a jury, addressing her family as if a judge.

It is difficult to engage with a cast playing such unredeemingly unsympathetic characters; even fiancé Gerald's brief dalliance with altruism fails to make him endearing, nor Eric's seeing the light, possibly. At least brother and sister, as the younger generation, do suggest some hope for the future - yet the bigger tragedy is how nothing seems to have changed, never mind improved, in 100 years.

But although most of these characters are by no means as commanding as the amazing set, it is still makes for a thrilling production. Not surprisingly, all seats are sold out for this catalytic visit, so let's hope the Inspector calls again.