Around The World in 80 Days - The Lowry, Salford

Forget the seasonal stress of going away for Christmas this year. Instead, take a fun-filled journey around the world without leaving Manchester. The best part? It won’t even take you 80 days.

Directed by Theresa Heskins, Laura Eason’s adaptation of Jules Verne’s celebrated novel has already enjoyed a well-received run at London’s New Vic Theatre in 2013 followed by a successful season at the Royal Exchange Theatre, Manchester in 2014.

Previously staged in the round, this version follows the mysterious and fabulously wealthy Phileas Fogg (Andrew Pollard), as he wagers his life’s fortune that he can circumnavigate the globe in just 80 days. Joined by his loyal valet, Passepartout (Michael Hugo), they travel from the misty alleys of Victorian London to the exotic subcontinent and the Wild West in a race against the clock. All via six trains, five boats, four fights, three dances, two circus acts and an elephant.

Upon entering the Quays Theatre, the stage is set. Seen through the haze of a steam train, a staircase made from suitcases is topped with umbrellas and a lone overcoat, whilst a clock ticks in the background, wholly appropriate as time really is of the essence in this story. One element of the set that could have been used more is the large 1872 world map that acted as a backdrop. As it was on stage throughout, it would have been great to see Fogg’s progress across the world charted in some way. 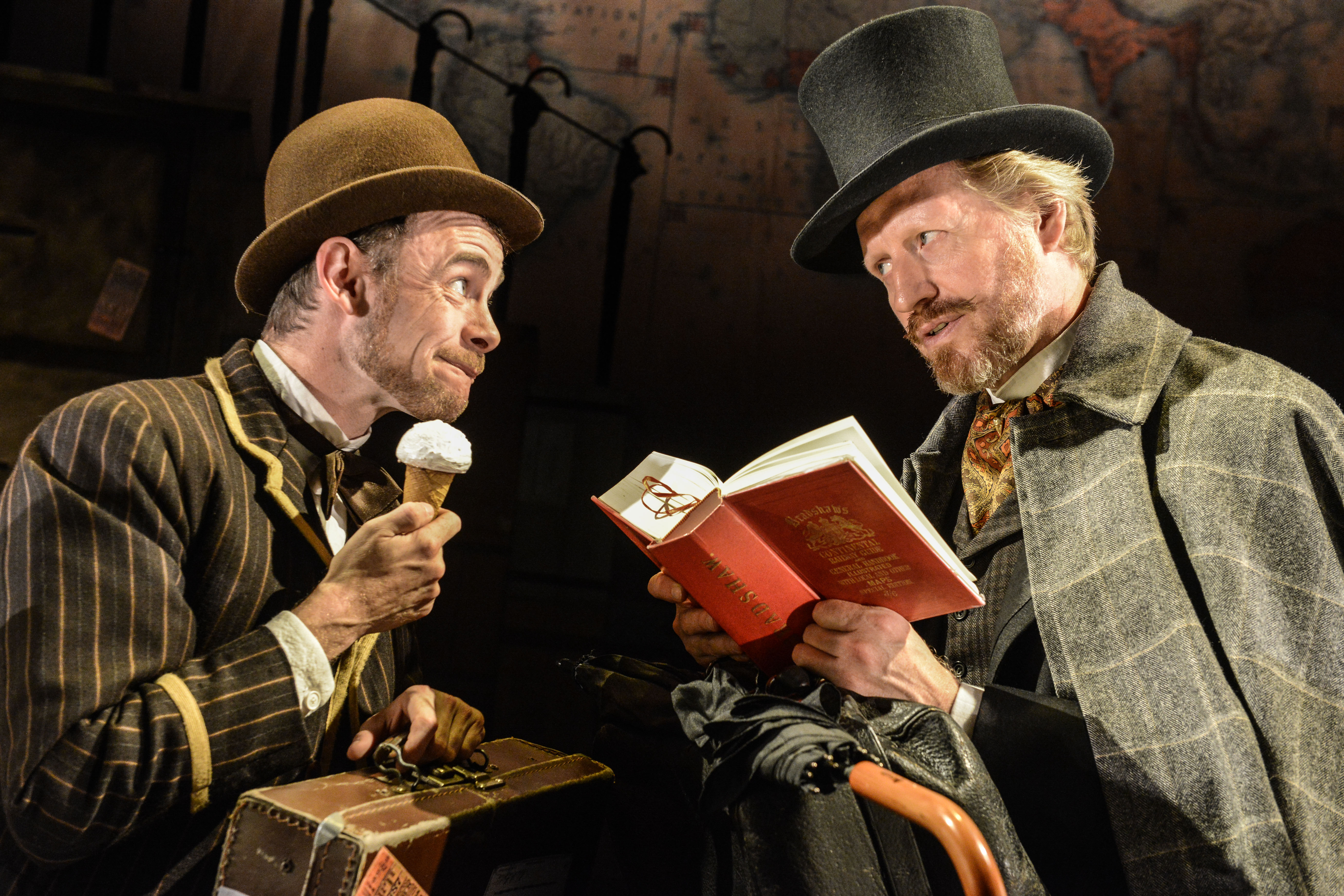 We begin with a full exploration of Fogg’s idiosyncrasies, the quintessential English Gentleman played deftly by Pollard, who ensured there was none of the Victorian stuffiness usually associated with this canon. We accompany Fogg on both a literal and metaphorical journey across the continents, his metamorphosis expedited by a chance encounter with beautiful widow Mrs Aouda played with both grace and gumption by Kirsten Foster.

Attempting to stop Fogg in his tracks is the play’s antagonist, cunning Inspector Fix (moustachioed Dennis Herdman), who believes he is a bank robber. Herdman’s interpretation stayed just the right side of pantomime villain (despite him returning to the stage at the start of Act 2 to boos and hisses); the highlight for me being a Basil Fawlty moment as he takes his frustration out  by giving an innocent pair of shoes ‘a damn good thrashing.’

For me, Hugo is the real stand-out of this play. His version of Passepartout is caricatured not clichéd, pedantic yet playful, he really is a comedic force to be reckoned with. I can’t even begin to work out the calories he must burn over the course of the show amid his comical exchanges and no-contact stage combat (has to be seen to be believed) with Fix and his interaction with the audience. Though this last point isn’t reserved solely for Hugo – without giving too much away, the cast don’t break the fourth wall, they smashed right through it.

You’d be forgiven for thinking that this production is perhaps more around the world in 80 characters – actually the eight members of the cast play 125 to be exact. The scene changes are seamless; the capable stage crew expertly assisted by various cast members throughout as they transform the largely minimalist set into another destination in seconds, through carefully considered props and costumes. James Atherton’s original musical composition takes us from London to Calcutta, from Hong Kong to the Wild West, building and relieving tension throughout.

It’s impossible to mention all the characters played by the cast, but special mention must go Matthew ‘snake hips’ Ganley and the extremely limber Nyron Levy –  each character he took on was completely distinguishable from the previous, largely thanks to the plethora of facial expressions he has at his disposal.

Pace wise, the show was wonderfully chaotic at times and pretty exhausting to watch – in the very best way. The cast charmed their way through several instances of what seemed to be ‘filler’ scenes, designed to help lengthen the runtime of the play that would otherwise have felt forced –no mean feat given the short length of the script.

Is it family-friendly? Absolutely.  There were quite a few children in the audience on a weekday and considering the competition in the Lowry’s theatre next door was ELF - the musical, this was quite an achievement.  Forget laugh a minute, this is laugh a second. Spectacularly slapstick and endlessly entertaining, if you’re looking for festive fun suitable for all the family, you certainly won’t be disappointed.