The Last Quiz Night on Earth - The Welcome Inn

The end is near. A giant asteroid is hurtling towards Earth, threatening to wipe out all human life. Its trajectory isn’t changing. It isn’t about to burn up on the atmosphere. Bruce Willis isn’t available to blow it up. The final act of human civilisation is at hand. What does any rational person do in such circumstances? Keep their appointment with the weekly pub quiz, of course!

That’s the premise of The Last Quiz Night on Earth, written by Alison Carr and directed by Hannah Tyrrell-Pinder, produced by Box of Tricks Theatre Company in association with The Lowry. Kathy (Meriel Scholfield), the landlady of The Four Horsemen (not an auspicious name for a pub), is not about to take the apocalypse lying down, and neither is her super-dedicated and bombastic quizmaster Rav (Shaban Dar), who plan to host their traditional pub quiz as if nothing of importance were happening. As one would expect, things don’t go entirely to plan. Throughout the course of the quiz they are interrupted by Kathy’s estranged brother Bobby (Chris Jack), who rejected the life of pub landlord years previously and moved away to make a success of himself, and Fran (Amy Drake), Rav’s childhood sweetheart who has been pining for him for over a decade. What follows is an evening where painful truths are laid bare and feelings reconciled in the shadow of the looming doomsday.

The concept of the play is simple but innovative. While cinema has made liberal use of apocalyptic and post-apocalyptic scenarios for decades, they have been utilised much less often in the world of theatre. The play is refreshing as it employs this scenario for comedy-drama purposes, rather than a heavy-handed allegory about environmental destruction, social isolation, etc. While some may label this a lack of ambition, the play is primarily about the characters and through them addresses issues such as belonging, community, friendship, disappointment, and forgiveness. It is perfectly suited to the site-specific nature of the performance (The Welcome Inn, Salford) and by including the audience in the shambolic quiz creates a genuine atmosphere and sense of fun.

The performers are engaging and manage to balance the attention-grabbing side of the production with quieter dramatic moments for the characters. The setting itself may be challenging as the audience is encouraged to split up into teams and confer with one another during the quiz, so talkative audiences may prove to be a distraction from the actual performance. Having said that, the production we attended was remarkably civilised and maintained the balance between audience interaction and giving the performers the right amount of attention.

The site-specific nature of the production was engaging in itself and provided an intimate venue for a performance which might easily have gotten lost on a more traditional stage. The production also made good use of lighting and props to convey a sense of looming disquiet. Similarly, Rav’s CD collection provided a welcome method of puncturing the dramatic tension that builds up between the characters once they arrive at their respective moments of emotional catharsis.

Overall, The Last Quiz Night on Earth is a fantastic night down the pub and at the theatre and was a joy to experience. 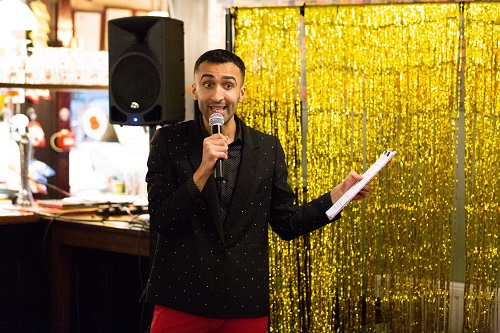