Based on the 1939 Alfred Hitchcock film, The Lady Vanishes visits Theatr Clwyd as part of its UK Tour.

Adapted by Anthony Lampard and Directed by Roy Marsden, we are taken on a thriller from pre-war Nazi Germany on a train journey, when a young Iris (Lorna Fitzgerald) receives a bang on the head and is looked after by Miss Froy (Juliet Mills) until Iris takes a nap only to awaken to find Miss Froy has disappeared and everyone on the train denies Miss Froy ever existed.

Iris knows everyone is lying and so makes it her mission to find Miss Froy and the reason behind the disappearance. With the help of fellow passenger Max (Matt Barber) the story unfolds before our eyes.

The stage in the Anthony Hopkins Theatre opens to a busy German train station and the opening scene is very busy. Lots of hustle and bustle and goings on. Here is where I found my main issue. With lots of people talking, loud station sounds and a tannoy, you tend to lose some of the dialogue, whether it be certain actors not quite projecting enough or the background sounds are a little too loud for what is happening on stage, I found these parts a little distracting. 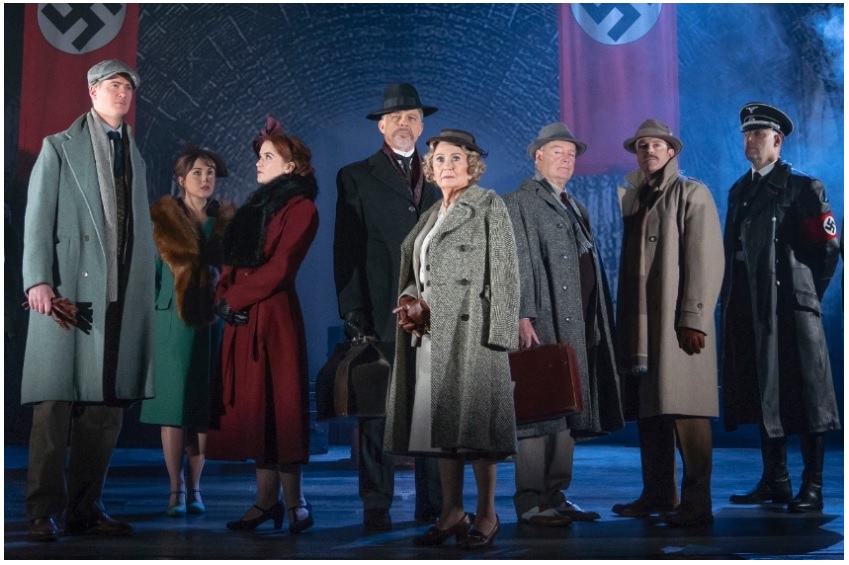 Suddenly, the clever set, designed by Morgan Large, closes in from either side to create a train corridor with two compartments. This is where the distraction disappeared and from then on, the story unfolds, and the action takes place.

Fitzgerald plays Iris perfectly. She is very strong in the role, extremely clearly spoken and carries the play right through from beginning to end with confidence. A complete joy to watch. Paired with the brilliant Barber as Max, the characters seemed the complete opposite but worked extremely well together to figure out this mystery, adding much needed humour throughout what could be quite a dark play.

Mills as Miss Froy played a wonderful role, although missing for a large part of the play, is integral and you see a huge difference in character from beginning to end.

Many other characters helped bring this story to life as other passengers on the train including Maxwell Cauldwell as Dr Hartz, Joe Reisig as the Official, Philip Lowrie as Eric and Elizabeth Payne as Margaret. Each of these characters have their own story and add more drama to this thriller.

Robert Duncan as Charters and Ben Nealdon as Caldicott were a great pair of characters and helped bring a lot of humour to the story where it was needed.

The set was kept simple between scenes, but the fantastic cast brought on and cleared set pieces such as tables and chairs, luggage and props keeping the action flowing and the story moving along nicely. Lighting made a huge impact to the drama of the play and Lighting designer Charlie Morgan Jones has done an incredible job with this play. With much of the show being set in the corridor of a train, it could get quite boring and mundane but with the fantastic lighting, this was not the case.

The story kept a steady pace throughout and kept you fully immersed, taking you on the journey with them and feeling all the emotions they felt.

Mark Carlisle, Natalie Law, James Boswell and Cara Ballingall complete the cast and they play numerous characters who cannot be ignored and add so much to the telling of the story and the smooth running of the show.

The Lady Vanishes is a gripping thriller with many twists and turns and is brought to life wonderfully by this fantastic cast. Until Saturday https://www.theatrclwyd.com/en/whats-on/the-lady-vanishes/