Tonight, saw Willy Russell’s Stags and Hens take to the stage, under the stage management of Paul Downham, and directorship of Carole Carr. Lighting is provided by Geoff Scullard and James Merrington, with sound from Christine Mills and Lewis Downham.

We start the evening with disco music playing and a man falling through the swinging doors. Next, we meet the Hens, who are out to celebrate the wedding of Linda (played by Francesca Heraghty-Smith), she is accompanied by her friends Bernadette (Bernie) the bossy married friend, played by Fiona Primrose. Carol (Tabitha Hughes, who began acting at the age of 8 and joined the Garrick Academy of Performing Arts), Maureen (played by the larger than life Megan Royle) and Frances (Frankie) played by Parissa Zamanpour who portrays the more glamorous friend. The friends chat away in the ladies toilet as Linda sits in a cubicle thinking. 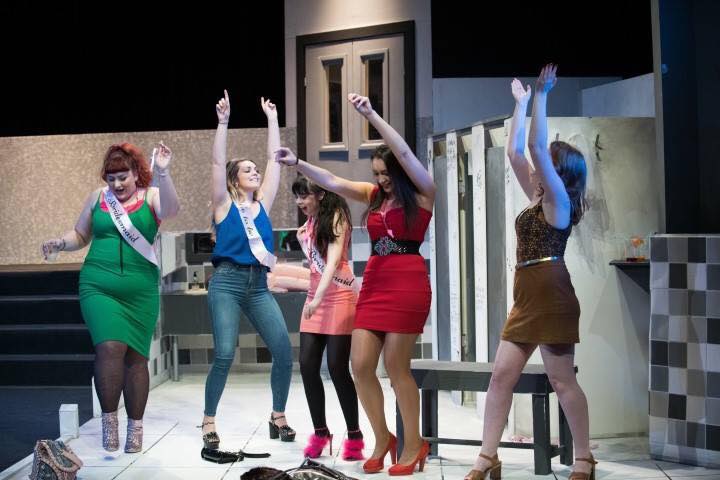 We are then introduced to the Stags as Dave (Adam Rogers – who also plays the Roadie) is carried to the Gents by Billy (Charlie Gallagher), Kav (Josh Evans-Smith) and Robbie (Chris Wagstaff), Dave is so out of it he throws up all over Robbie’s leg as the lads dump him in a cubicle. We are then treated to discussions of why they went for a curry before drinking. The next thing they want to know is where Eddy (Josh Leach) the controlling aggressive friend is.

During the chats we establish that Linda is due to marry Dave the very next day and that Maureen just wants a fella. Billy is the joker of the pack and it soon becomes clear that Eddy controls the friends.

We switch between the Ladies loo and the Gents as the friends go between the club and the toilet. The production is set in 2008 Liverpool (whereas the original was set in 1978) but could probably be any City in the country and many will easily relate to the conversations.

We also get to meet the famous Peter McGeegan (Ethan Martin) whose band is playing the club that evening. And we find that Peter is the ex of Linda and when the girls realise that, Dave and his mates are in the club they go into meltdown. The only thing to do is for one group to move on, but can it be done. Then Frances sees Peter and Linda together and things start to get out of hand. How will things pan out?

Carol fancies Robbie, but does Robbie fancy Carol? Will they get together? Bernie fancies Eddy, but does Eddy fancy Bernie, or is he just an angry man that likes to control people?

To find out the answers to these questions book your ticket now for this laugh a minute production. The language used is typical of that used when groups of Stags and Hens are out for the night celebrating the bride to be and groom’s final night of freedom. This is definitely a show for the over 18’s

The acting is exceptional from this latest Garrick company and the accents very well performed. The set is well constructed, and wardrobe is classical of the time.

This is a show with a real feel good factor that I would happily watch again and would rate as a well-deserved 4 stars.