Back To The Future Comes to Manchester 1st

Producer Colin Ingram (Ghost – The Musical) and the creators of the film Back To The Future, Robert Zemeckis and Bob Gale, are delighted to announce that BACK TO THE FUTURE The Musical will open at the Manchester Opera House on 20th February 2020 for a strictly limited 12-week season, finishing on 17 May, prior to transferring to the West End. The Box Office will open at 10.00am on Friday 24th May 2019.

Based on the Universal Pictures/Amblin Entertainment film, the new musical will have a book by Bob Gale and new music and lyrics by Emmy and Grammy Award-winning Alan Silvestri and six-time Grammy Award-winning Glen Ballard, with additional songs from the film including The Power of Love and Johnny B. Goode.

BACK TO THE FUTURE The Musical will be directed by Tony Award-winning director John Rando (Urinetown, On The Town), alongside the multi Tony and Olivier Award-winning design team of Tim Hatley (set and costume design), Hugh Vanstone (lighting), Gareth Owen (sound) and Finn Ross (video), with choreography by Chris Bailey, illusions by Paul Kieve and musical supervision and vocal arrangements by Nick Finlow. Orchestrations will be by Ethan Popp, with dance arrangements by David Chase. 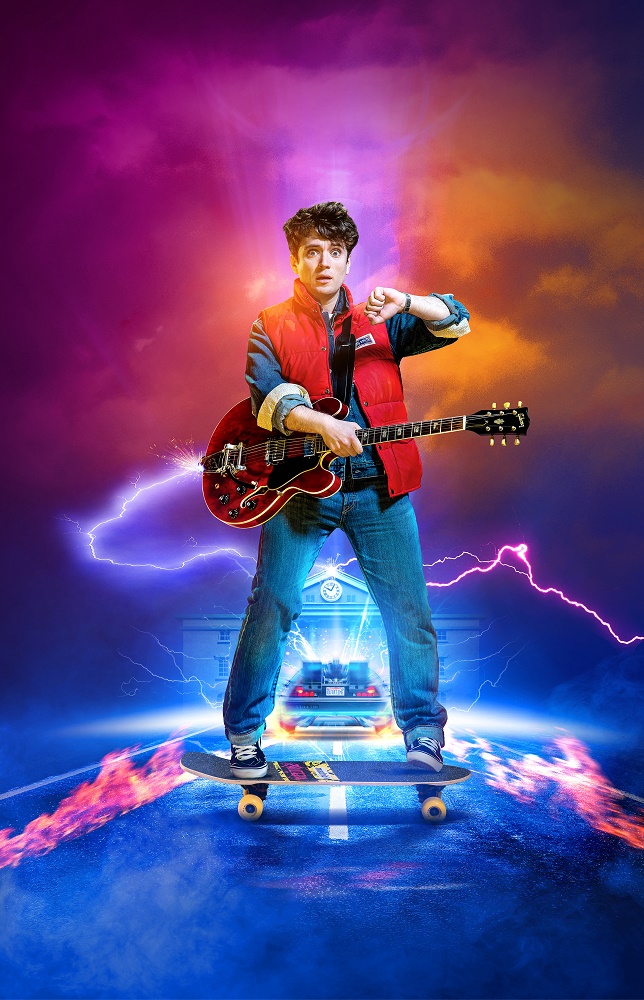 The role of Marty McFly will be played by Olly Dobson, whose previous West End credits include the original cast of Bat Out Of Hell The Musical and Matilda. Further casting to be announced.

Back to the Future the movie was released in 1985, starring Michael J. Fox as Marty McFly and Christopher Lloyd as Dr Emmett Brown. The film grossed $360.6 million (£279 million) at the box office worldwide and the total box office for all three films in the Back to the Future franchise was $936.6 million (over $1.8 billion in today’s money).

Marty McFly is a rock ‘n’ roll teenager who is accidentally transported back to 1955 in a time-travelling DeLorean invented by his friend, Dr Emmett Brown. But before he can return to 1985, Marty must make sure his high school-aged parents fall in love in order to save his own existence.

All members of the original cast of the film are excited about this new musical version. Christopher Lloyd, who played Doc Brown, said, “Ever since Bob Gale told me about this, I’ve been eagerly anticipating it and, in particular, wondering what it will be like to hear Doc Brown sing. So I’m really looking forward to attending the opening in Manchester to experience our wonderful movie as a musical. I’m only sorry I don’t have a real time machine so that I could see it tomorrow!”

Bob Gale, who wrote the film with Robert Zemeckis and who is writing the book for the musical said, “Bob Zemeckis and I have been trying to get this project off the ground for years, but good things take time and finally, the time is right. Our cast is outstanding, the songs are fantastic, and director John Rando is doing an amazing job ensuring the show truly captures the magic of the movie. We’re thrilled that we can retell our story on stage in a brand-new way, and we’re certain that Back to the Future fans all over the world will share our enthusiasm. In the words of Marty McFly, ‘your kids are gonna love it’ – and so will you and your parents. There’s truly no better way to celebrate the movie’s 35th Anniversary, and we’re happy to say ‘The Future’ is coming back!”

Producer Colin Ingram said, “This show has been six years in the making and we are delighted to be showing it to the people of Manchester first before the rest of the world gets to see it. As I did with Ghost – The Musical, Manchester gets it first, so synchronize your watches because, when this musical hits 88 mph, you’re going to see some serious…entertainment!”

John Rando has directed extensively internationally and on Broadway, winning the Tony Award for Urinetown the Musical in 2002, and receiving a further nomination in 2015 for the Broadway revival of On the Town. Other productions include Gettin’ the Band Back Together and Jerry Springer – The Opera.

Robert Zemeckis directed all three of the Back to the Future films, as well as Romancing the Stone, Who Framed Roger Rabbit and Forrest Gump, for which he won the Oscar for Best Director. Further directing credits include Cast Away, What Lies Beneath, The Polar Express, Flight and A Christmas Carol starring Jim Carrey.

Bob Gale co-wrote and co-produced the Back to the Future Trilogy with Robert Zemeckis, his long-standing collaborator. In addition to numerous other screenplays, he has also written comics, including issues of Batman and The Amazing Spider-Man.

Alan Silvestri first worked with Robert Zemeckis on the 1984 film Romancing the Stone. Since then, he has composed the music for all of Zemeckis’s films, including the Back to the Future Trilogy, Who Framed Roger Rabbit, Death Becomes Her, Forrest Gump, Cast Away and The Polar Express. He won two Grammy Awards for ‘Believe’ from The Polar Express and for Cast Away.

Six-time Grammy award-winner Glen Ballard has sold more than 150 million records worldwide and has worked with Aretha Franklin, Van Halen, Aerosmith and Katy Perry, to name a few. He co-wrote and produced Billboard magazine’s Best Album of the Decade (1990s), and the multi-platinum Jagged Little Pill for Alanis Morissette. He co-wrote the Grammy Award-winning ‘Believe’ with Alan Silvestri for The Polar Express, and his other songs for films include ‘Ordinary Miracle’ for Charlotte’s Web and ‘A Hero Comes Home’ for Beowulf. He co-wrote music and lyrics for Ghost – the Musical with Dave Stewart.

BACK TO THE FUTURE The Musical