High school pals Sparky, Jinx, Smudge, and Francis are a talented “guy group” who call themselves ‘The Plaids’, and love singing harmony.

They used the basement of Smudge’s family’s plumbing supply company to practise and they would play school proms and department stores, whilst dreaming about success and making it big.

When the boys are killed in a car accident on the way to their first big gig at the Airport Hilton Cocktail Bar, on 9th February 1964, for some reason the young men linger in limbo. It’s as if they need to finish the ‘gig’ to be able to win their place in Heaven and claim the deluxe plaid dinner jackets they had dreamed of and saved up for, for so long... 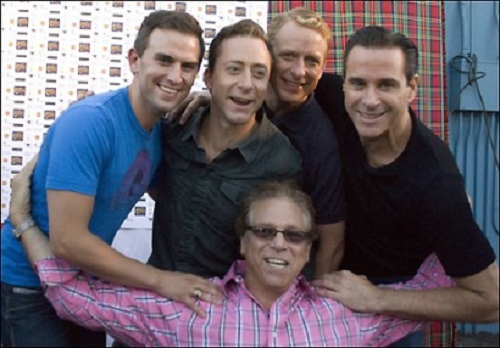 Some kind of phenomena allows them to return to Earth to perform their final concert but will it lead to Heaven and the jackets and will they overcome asthma, ulcers, nerves, and forgotten lyrics… Will they find THEIR perfect blend?

I must admit, I had never heard of ‘Forever Plaid’ so this was all new to me. I am happy to say, I have now downloaded the soundtrack. It is a very clever concept and another in the Jukebox musical genre with lots of recognisable music.

With a cast of just 4 men (plus 2 band members), it would be easy to lose interest, but the guys keep you entertained from start to finish. With clever animation and narration from David Hyde Pearce at the start, they storm their way through some wonderful tunes with comedy and enthusiasm.

Each one of the boys has their own character ‘flaw’ - nose bleeds, asthma, a retainer and an ulcer and the comedy element of these problems are played well…

With only 2 costumes per character, there was not a lot for this wardrobe department but what they provided was absolutely spot on. Not much to hair and make-up as not really a show that required such but the hairstyles were in keeping with the 50’s & 60’s.

Choreography is minimal with the usual arm sways and leg dips that a ‘guy group’ is well known for but all executed extremely well from each of the performers.

Vocally, there was not a bum note between them – they were on top form. Stan Chandler as Jinx, David Engel as Smudge, Larry Raben as Sparky and Daniel Reichard as Francis “Franky” all had great voices and their ranges were superb. I do have to mention though, Stan Chandler as Jinx and his rendition of ‘Cry’ – it was simply brilliant.

All extremely capable actors too with super comic timing. The props usage and circus tricks in ‘Mercury’ and ‘Lady of Spain’ were brilliant.

A beautiful finish from all four singing in PERFECT HARMONY….

I do think that this is possibly a great money earner for some amateur theatres if available for license as not too much to lay out… I am aware that there are only 4 men involved but there is a way to keep your female company in the mix especially if you are going to do a cabaret seating arrangement as this was. Ladies in 50’s outfits serving perhaps and being your front of house team… It’s definitely worth a look. With the style of music on show, it brings forth a nostalgia that even I felt I knew, and I wasn’t born yet.

This is currently playing on YouTube and I encourage you to watch it. It is funny, charming, delightful and pays homage to some magical music of the decades.