Written by William Shakespeare in approximately 1607, Coriolanus is set in Ancient Rome and is largely based on Thomas North’s translation of Plutarch’s ‘The Lives of the Noble Grecians and Romans’.

This political drama begins with the aftermath of a famine, the people are starving and are protesting that they want to be able to set their own prices for grain. We see reference to this on the back wall of the stage where graffiti is daubed with the words ‘ANNONA PLEBIS’ which roughly translated means ‘grain’ and ‘people’. The nobles decide that the people shall have five representatives, a move that angers Caius Martius (Tom Hiddleston) who holds the common people in contempt. Martius then goes off to battle against neighbouring tribe the Volscians led by Tullus Aufidius (Hadley Fraser) and returns home victorious and a hero. As a reward Martius is given the name ‘Coriolanus’ named after the Italian city of Corioles. The Senate offers to make his consul, but in order to gain his office he must go to the plebeians and plead for votes. He does not relish this task and does it reluctantly. Even though initially the people support his vote, his attitude towards them has made them uneasy and they reverse their vote, encouraged by two manipulative tribunes Brutus (Elliot Levey) and Sicinia (Helen Schlesinger). The backlash from the people’s change of heart is fierce and Coriolanus’ pride ignites his fury and he speaks bluntly about his contempt for the plebeians and their new powers. 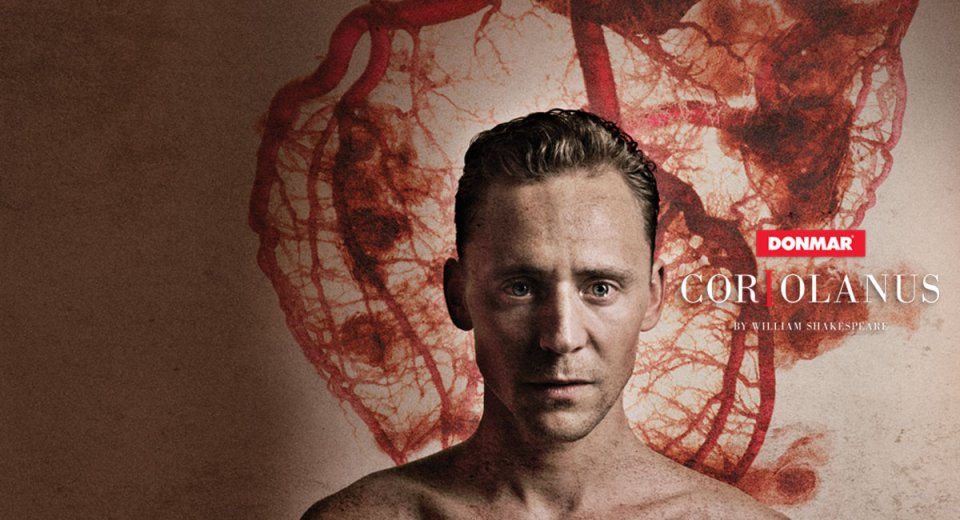 Through the whole play, we see the gradual self-destruction of Coriolanus as he struggles to rein in his pride and truly lives up to the expression that ‘pride comes before a fall’. It is not one of Shakespeare’s more widely performed plays and it is easy to see why. Even though it has drama and death, it lacks depth of character. It is never really explained why Coriolanus behaves in the way that he does. We do see his very domineering mother Volumnia (Deborah Findlay), who seems to care more for his victory and the kudos this brings, rather being concerned for her son’s safety which could explain why he has an unbalanced view of life.

We also, do not really see evidence of the type of relationship Coriolanus has with his wife Virgilia (Birgitte Hjort Sorensen), so character development is stifled. Director Josie Rourke appears to have tried to draw on the drama of the Romans’ need to conquer and relish in their victories, and the plight of the common people who wish to have representation and food.

We see some good performances from Mark Gatiss as Menenius who dodges the fighting but uses his words as his weapon, Tom Hiddleston as Coriolanus does his best to tease out the nuances of the character of Coriolanus, despite a lack of Shakespeare’s usual poetic vocabulary. Deborah Findlay is monumental as his mother Volumnia who bravely secures peace for the people of Rome.

By far the best spectacle in the play was the fight scene between Coriolanus (Hiddleston) and Tullus Aufidius (Hadley Fraser), a technically brilliant piece of combat expertly executed and well planned by fight director Richard Ryan.

Designer Lucy Osbourne, gave us a stage which allowed easy movement with only a red painted square to indicate the boundaries of a room and the dramatic backdrop of the painted wall with graffiti, worked well to depict the unrest within the plebeians. The lighting design by Mark Henderson allowed us to have focal points at important dramatic moments, such as when

Coriolanus need to wash his wounds, he showered under a simple spotlight so that we could see the pain etched on his face.

I found this play easy to watch as the plot is not too intricate, unlike some of Shakespeare’s tragedies and the performances and direction were well done.