Wayne McGregor’s ballet triptych created in 2015 is inspired by the writings of Virginia Woolf and contains an original score by Max Richter – superbly performed by the Orchestra of the Royal Opera House conducted by Koen Kessels – with astounding lighting schemes from Lucy Carter and stunning set designs throughout.

Woolf Works recreates the emotions, themes, and fluid style of three of Woolf’s novels beginning with ‘I Now, I Then’ inspired by Mrs Dalloway (1925); then ‘Becomings’ derived from Orlando (1928); concluding with ‘Tuesday’, which draws on The Waves (1931). The three pieces stand alone as distinctly as the works that inspire them although there is a chronology with underlying threads that seamlessly bring them together, most notably the central performance from 52-year old ballerina Alessandra Ferri.

‘I Now, I Then’ opens with the only recording of Woolf’s voice from 1937 with a backdrop of Ravi Deepres’ grainy film of a bygone London accompanying Ciguë’s three slowly revolving open portals which present the novel’s shift between present and past and the worlds of two characters: Clarissa (Ferri), a middle-aged society hostess who dances in the safe embrace of her dull husband (Gary Avis) whilst recalling her younger self (Beatriz Stix-Brunell), with a lesbian romance with friend Sally (Francesca Hayward) sensitively remembered through a gentle kiss alongside the charm of one-time suitor Peter (Federico Bonelli). 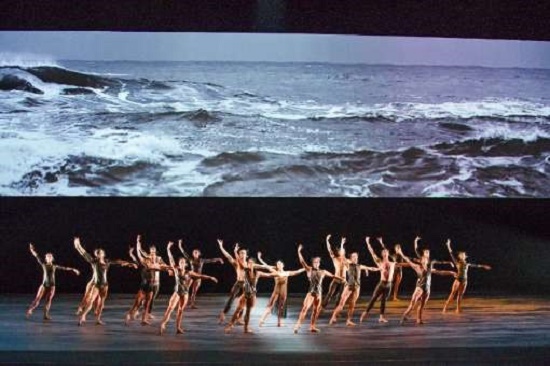 In contrast, shell-shocked Septimus (Edward Watson) is haunted by nightmares he cannot escape from including the image of a dead friend (Tristan Dyer). Unlike the novel, Clarissa and Septimus are brought together in the ballet to serve to echo for each other what might have been.

‘Becomings’ is in complete contrast with laser light show style effects designed to reflect the pace of the original novel in which a young nobleman lives three centuries without aging and with the mysterious change of gender during his travails represented by a 12-strong ensemble replete in mock-Elizabethan androgynous outfits including ruffs, doublets and tutus created by Moritz Junge. With different pairings brought together to reflect different times, it was a frenzied affair and whilst Natalia Osipova, Steven McRae, Eric Underwood, Akane Takada, Sarah Lamb and Watson stood out, it was hard for the choreography to keep up with the overall pace of the light and music and ultimately felt as if we had missed out on something which is a shame when you consider the array of talent on offer.

The final part, ‘Tuesday’, designed as well as choreographed by McGregor, is dominated by the poignant reading by Gillian Anderson of Woolf’s suicide note to her husband in 1941 against the moving backdrop of black and white film of breaking waves, and sees the return of Ferri, as Woolf, with the pieces chronological childhood to grave action serving to reflect as her flashbacks as she drowns in what was an incredibly moving piece. Ferri, Bonelli, and Lamb stood out in a strong ensemble intended to represent the waves washing over the piece.

This was a fascinating collaborative and creative effort that successfully albeit somewhat ironically breathed new life back into The Royal Ballet and represented a breakthrough for McGregor almost ten years into his role as resident choreographer with this compellingly moving and heartfelt experience.

Woolf Works is available to view for free until 9th July 2020 at https://www.roh.org.uk/