Jack and the Beanstalk is a relatively recent fairy tale with the earliest surviving written version dating from the 19th Century. Where it is particularly unusual is that original versions lacked the moral undertone and warning more overtly stated in other fairy tales and relied on a young audience knowing that robbery and murder (by Jack)are wrong. Later versions became more explicit in illustrating the villainous nature of the giant and justifying Jack's actions as worthy retribution.

And then of course all such tales evolved to the pantomime performances we all know and love today and where tonight Rainhill Musical Theatre Company truly excelled with their combinations of song, dance, and slapstick humour to delight their audience.

A dark opening of zombies in chains introduced us to the Giant's henchman, Fleshcreep (Claire Jones) who did a wonderful job of scaring us and regularly eliciting a chorus of boos throughout the evening - just what every Panto-baddy wants to hear.

Fairydust (Bet Davies) offered the contrast of good with lines delivered in verse before we were into our first full song and dance number of the evening which was admirably performed and with great support from the Chorus and in particular the younger players (Team B tonight as performances are alternated between two groups). The choreography throughout the evening was well thought through and it is lovely to watch when you can see both the dancers and cast enjoying themselves.

Some minor microphone issues were dealt with quickly as Jack's siblings, Jill (Michelle Williams, who is also Assistant Director) and Bobby (David Stevens) were introduced with Williams providing the 'sense' to Stevens 'nonsense' as he took on the Panto-fool role to good effect. 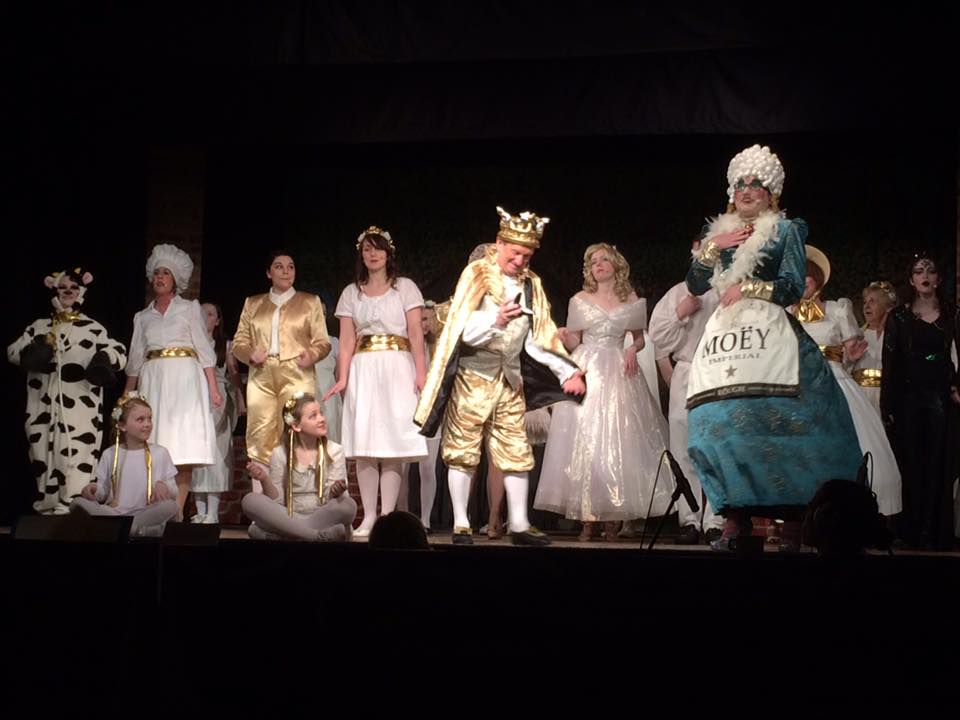 Further song and dance routines move the story along and bring other characters into play whilst allowing a number of great solos and duets from cast members including Princess Apricot (Sally Adamson), King Satupon (Keith Marsh), Patty Cake (Ruth Gibb), Bo Peep (Karen Woods) and Boy Blue (Nicola Lyon) to be delivered as well as allowing impressive set changes to take us from the village to the clouds to the Giant's palace and back again.

You can't have a Panto without a dame and Jack's mother, Dame Trott (Dru Grindley-Fitzgerald) superbly ticked all the boxes and some along with an ever-changing wardrobe of overly dramatic outfits. Daisy the Cow (Rosie Sephton) stole the show a few times with superb facial performances - a must when your only lines are 'moo'.

And finally Jack (Sam Moores) appears and the story begins to unfold as our cast of happy-go-lucky innocents are scared by the constant 'Fe-Fi-Fo-Fum' of the Giant (ably voiced by Mike Massey) in the background but who sadly we never get to see, although this is more than made up for with Jones' superbly evil henchman.

I was most impressed with how the numbers were shared out amongst the cast allowing them all an opportunity to shine to able accompaniment on the keyboard from Musical Director (Wayne Oakes) and drummer (George Grundy). Many happy returns by the way to Oakes as we got to celebrate his birthday in the interval.

Wonderful interplay between Adamson's Princess and Moores' Jack saw thoughtful delivery with a mix of pathos and irony alongside more great musical numbers; Adamson's solo on 'You're My Flashlight' was outstanding and I am glad the Giant didn't get to eat her.

This well-worked and cleverly delivered performance has to have a happy ending of course and we saw a number of betrothals accompanied at the end by a rendition of 'Happy'. Looking around the audience it was clear to see that we all were. Much credit must go to the Director, Maria Heaton, for bringing the whole thing together in such a wonderful way.

Rainhill Musical Theatre Company was originally founded as Rainhill Amateur Operatic Society in 1951 - the name change is relatively recent - and is affiliated to the National Operatic and Dramatic Association (NODA). They produce two shows/revues/concerts per year, typically in January and June. There is also a Youth Group who perform a show or concert in April and November.

Jack and the Beanstalk plays at Rainhill Village Hall until 17th January 2016 with matinee performances at 2.15pm on Saturday and Sunday and an evening performance at 7.30pm on Saturday.

Tickets are available via telephone hotline 0151 292 4458 or email This email address is being protected from spambots. You need JavaScript enabled to view it..