Manchester is a place full of stories. A city of music and poetry, of sense and romanticism, of love.

It was appropriate, perhaps deliberately so, that underlying the seven plays shown, on this Valentines night, was love in its different forms. There was love between two people, a nurses love and familial love between the generations.

Each play was set in a different locality in Manchester, but the themes were universal.

I have been to evenings like this before where numerous short plays are presented. Usually there is at least one play that is weaker than the others. Tonight, the quality of writing and performing was top notch across the board.

Running through a number of the plays were inter-generational relationships. In the first play, Valentine’s Day Mascara by Phil Pearson, the two characters were not so much from different generations but different times.

Jessica is upset as she has been stood up by her date on the most romantic day of the year. Magically, Emmeline Pankhurst’s statue comes to life and they talk. This play did veer at times to telling and not showing but I enjoyed it.

We then moved to that dark June day in 1996 of the Manchester bomb. It was a touching tale, called Daisy Mail, very well written by Joe Walsh. It was a moving story of a mother who takes her little girl into town on that fateful day. It wasn’t mawkish but it was incredibly real.

Men famously are unwilling to show their feelings. They go to the football and share their emotions through talking about the game. 90 minutes by Joe Walsh and Libby Hall examined this dynamic through a father and son going to watch United at Old Trafford.

In Forget Me Not by Libby Hall we had a searing examination of dementia and how it can break hearts. This was the play of the night. It told the story of a granddaughter who has been looking after her confused grandmother. The excellent performances matched the beautiful writing. This was high calibre stuff, deceptively simple, but so deep and meaningful.

Do Not Go Gently by Lorraine Knockton was a love letter to nurses. Nurse Walker tells us about her life in nursing, in caring. She remembers the past when there was a time to care and show love to the sick and vulnerable.

Another inter-generational tale, The Gaffer by Joe Walsh, told the story of a doorman who helps a young drug dealer on to the straight and narrow. Well-acted and written it had some nice theatrical moments.

The last play Coronation Vineyard by Joe Walsh was a knockabout bit of fun imagining The Street as directed by a camp Frenchman. It was nice to end with something light and frivolous. I never knew a Tennis racket could be such a deadly weapon.

I have to say all the actors were excellent. It is unfair, perhaps, to pick people out but Janet Lilley was stunning in Daisy Mail, Libby Hall was wonderful in Forget Me Not and I really enjoyed Scott T Berry as The Gaffer.

A triumph for the Two in a Bed Theatre Company and I would certainly recommend it if they do it again. 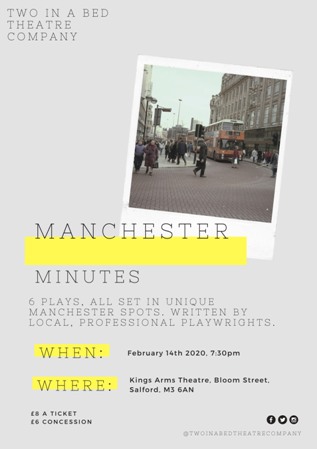